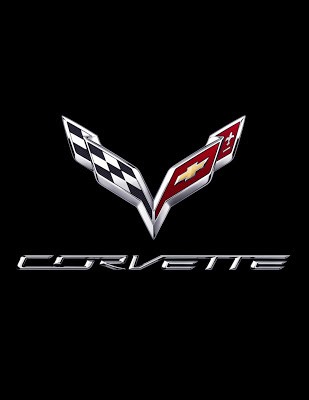 New Crossed Flags logo illustrates the character of the all-new, 'C7' Corvette, which features only two parts from the C6

Today, Chevrolet confirmed that the seventh-generation Corvette will debut the evening of Sunday, Jan. 13, 2013 in Detroit. To kick off the countdown to the debut, Chevrolet debuted the new Crossed Flags logo for the new, 2014 Corvette

"The all-new, seventh-generation Corvette deserved an all-new emblem," said Ed Welburn, GM vice president of global design. "The new Crossed Flags design reflects the character of the next Corvette. The flags are much more modern, more technical, and more detailed than before  underscoring the comprehensive redesign of the entire car."

"Winning the ALMS championships with the Corvette C6.R, against prestigious competitors from Ferrari, Porsche, and BMW is the perfect send-off for the sixth-generation Corvette," said Tadge Juechter, Corvette chief engineer.

"The seventh-generation Corvette will build on that success," Juechter continued. "With the new Corvette, we set out to build a world-challenging sports car with design, refinement, efficiency and driver engagement that is second to none. The result is a truly all-new Corvette. There are only two carryover parts from the C6 used in the C7  the cabin air filter and the rear latch for the removable roof panel."

The Crossed Flags logo has been a hallmark of the Corvette since its 1953 introduction. It has always incorporated a pair of flags, one a racing checkered flag and other featuring the Chevrolet "bowtie" emblem and a French fleur-de-lis. The design has evolved over the years, but has been featured on ore than 1.5 million Corvettes built between 1953 and today.

For the seventh-generation Corvette, the Crossed Flags design is a more technical, more angular, and ore swept appearance  a proportion that echoes the new car. It is also a more detailed representation, howing greater depth, color and attention to detail. More than 100 variations were considered before the final design was selected.

The new Crossed Flags design will be featured on the all-new, 2014 Chevrolet Corvette, which will ebut the evening of Sunday, Jan 13 in Detroit. The Corvette debut will be reserved for credentialed edia. Chevrolet will offer a limited number of tickets for Corvette enthusiasts, with proceeds enefiting the National Corvette Museum, in Bowling Green, Ky. Interested parties can visit ttp://www.corvettemuseum.org/registration/c7_reveal/info.shtml for more details.

Over the next weeks more information and video content about the seventh generation Corvette will be unlocked on http://www.one13thirteen.com/. Enthusiasts can join the conversation about the next generation Corvette, as well as keep track of any new announcements, on Facebook (facebook.com/corvette) and Twitter@Chevrolet(#Corvette). Fans who follow the #one13thirteen ashtag on Twitter will soon learn more and can look forward to exclusive updates.

FAST FACT: The first Corvette debuted as a concept car on January 17, 1953 at the GM Motorama in New York City. That car originally featured an emblem with a checkered flag crossed with an American flag. As the American flag couldnt be used for a commercial emblem, the logo was changed to the fleu-de-lis/bowtie design by the time the car went into production in June of 1953. The original logo with the American flag is on display at the National Corvette Museum.