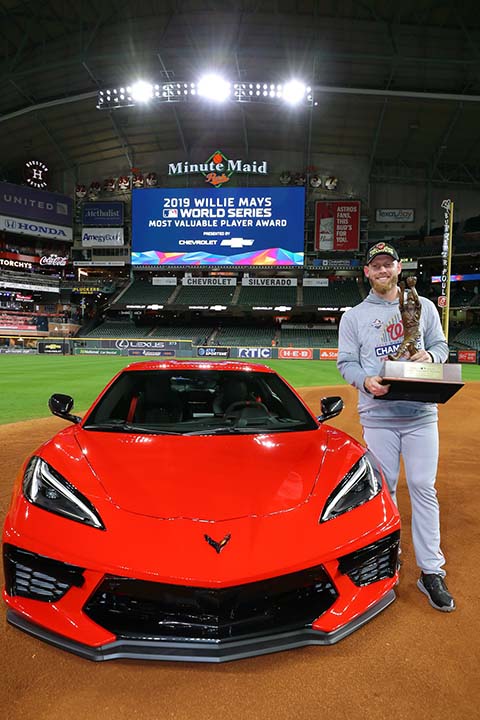 Strasburg won the car as part of the MVP award, with one marched out on the field for photo ops and such. (Those ops could have been better, since all of the Getty Images ones are at angles that kind of make the car look like a fish with its mouth open. But hey, no one asked me to stage them.) Car and Driver reports that Chevrolet said the car he's standing next to is “representative of” the one he'll get, but since the C8 isn't in production yet, he'll have to wait until early 2020 to actually get his prize.

This all rang vaguely familiar to me, as Mom said on the phone the other night while watching the game that there was “a Corvette on the field.” I thought she was either joking or watching something other than baseball without noticing that she changed the channel, because she barely pays attention to the World Series despite demanding to watch every game each year (I assume it happens yearly), since it's a “big sports event.”

She's like this with all “big sports events,” to the point that earlier in the World Series, she sat down to watch and didn't realize until about five innings in that it was a replay broadcast because of weather or something. I watched one game with her, where she tried to explain to me what “errors” in baseball were. I'm not convinced she knew what errors in baseball were.

I argued that we should change it to Halloweentown. I lost.

But the Nationals won, and Strasburg won a new C8 Corvette. I hope he likes it, whenever he does get it.