C8 Chevy Corvette Winds Up on Cinder Blocks in Detroit

Pro tip: Don't street-park, unless you just don't like the stock wheels 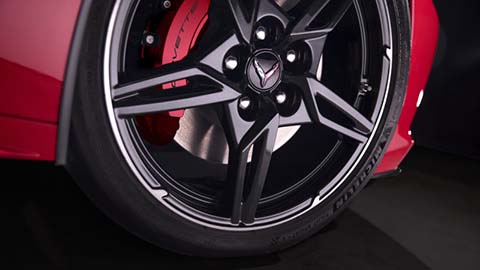 We are (checks calendar) 23 days into the first year of the C8-generation Corvette, and despite incredibly limited production, a few examples of Chevrolet's new mid-engine sports car have made it into the wild.

This one won't be making it any farther – not under its own power, anyway – for the time being. 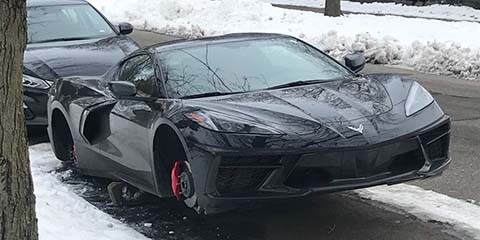 This photo of a C8 Corvette sitting curbside on cinderblocks in Metro Detroit was sent to Car and Driver. The unfortunate subject was spotted in the West Village neighborhood, C/D says, about halfway between downtown and the eastern suburbs of Grosse Pointe.

If there's a silver lining to this particular incident, it's that this Corvette likely belongs to GM, meaning it was probably in the hands of a journalist or employee when the theft occurred. That doesn't make the victim's life any easier, of course, but at least a brand-new Corvette owner didn't wake up to find their new prize vandalized.

There's not much good news on the Corvette front today. As you know, GM had to delay the start of C8 production due to the weeks-long UAW strike that ended in mid-October of last year. We're now hearing that GM has had to reduce its allocation of 2020-model-year Corvettes to dealers by 20% due to a production schedule that's shortened to just seven months – from February to Sept. 1, when production of 2021 models will begin.

The good news for those with orders already in the pipeline is that GM has stated it will prioritize builds for buyers who have already ordered cars, rather than letting dealers stock up on unsold inventory or (or hoard models with high mark-ups).

Here's hoping they have plenty of spare wheels.