2021 Chevy Corvette Holds the Line on Base Price, Orders Open Next Month

For its second model year, the mid-engined C8 will once again start at $59,995 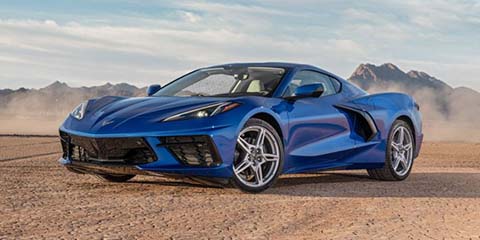 Chevy's enticing base price for the new C8 Corvette will carry over into the car's second model year. The 2021 Chevy Corvette will once again start at $59,995 for the coupe and $67,495 for the convertible, with production of the new model year scheduled to start later this year. We anticipate a few minor equipment changes for the 2021 Corvette but Chevy is not yet releasing details.

The mid-engined Corvette, revealed in July 2019, has faced a bumpy road in terms of manufacturing so far. After production was initially delayed because of a UAW strike in late 2019, the new model began rolling off the line in February 2020 only to have GM shut down all production in March due to the coronavirus pandemic.

Now back up and running, the company's Bowling Green, Kentucky, factory is currently producing 2020 Corvette coupes. The 2020 Corvette convertible model, which was revealed in October 2019, will start production later this summer, a Chevy spokesperson told C/D. Orders for both 2021 models will start in July, and the switchover to the new model year will occur later in the year. Full pricing and detailed equipment information for the 2021 should be released within the next few months.