Chevy's newest Corvette is due to arrive this year, and it may do something the Porsche 918 Spyder couldn't. 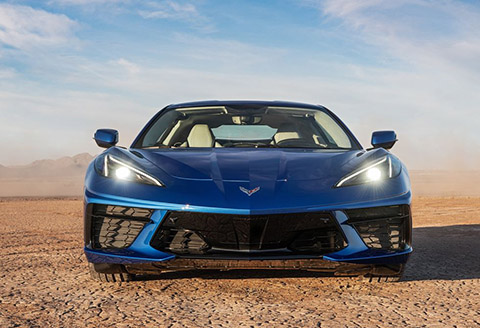 The new mid-engined C8 Corvette may have drawn some controversy when it first launched (partly for ditching its traditional front-engined layout, partly for its admittedly unusual interior), but it's safe to say it's since proven to be quite a success. It's won prestigious awards, and has proven among the fastest-selling cars on sale in 2021.

Indeed, with all that, it can be hard to remember the Stingray is only the base model. Chevy reportedly has four more C8 variants planned for the next few years, all of which will be bonkers – and, perhaps happily for some Vette customers, not heed GM's call for a zero-emissions future. Australia's Wheels magazine, as spotted by AutoEvolution, offers some details.

The Corvette Z06 should be first out of the gate. Reports have the reveal tapped for July 2021; according to the new report, it will employ the "world's most powerful naturally aspirated V8," a 5.5-liter flat-plane V8 derived from the C8.R race car's engine. While the C8.R is detuned to 500 horsepower, the Z06 will put out 617 hp. That figure blows away the comparatively paltry 526 horses Ford squeezed from the naturally aspirated 5.2-liter Voodoo V8 in the GT350. Even Porsche's out-of-production 918 Spyder produced "just" 599 hp from its naturally aspirated 4.6-liter V8 (though it made up for it with hybrid components).

The report also says the Z06 will come with more hard-edged driving upgrades, including a 9,000 rpm redline, an upgraded suspension, quicker steering and wider wheels with Michelin Cup tires.

Chevy will allegedly have three more Corvette variants coming after the Z06. The Corvette E-Ray will pair the 6.2-liter V8 from the Stingray with an electric motor powering the front wheels for all-wheel-drive and a total output of about 590 hp. That said, as per the report, it will actually be quicker from 0 to 60 mph than the Z06, thanks to the e-motor's instant torque and the car's AWD grip.

The Corvette ZR1, in turn, will allegedly keep the harder-edged driver mods from the Z06 and add a twin-turbo setup to the 5.5-liter V8 for 804 hp. Finally, the Corvette Zora will reportedly be the halo model; it should add the E-Ray's electric motor to the ZR1's twin-turbo 5.5-liter V8 to hit 1,000 hp.