A Mangusta Corvette? Not Exactly ...

Did Bill Mitchell Own a One-Off Mangusta Corvette? Not Exactly ...

On Friday, April 23, 2021, I had the good fortune of visiting the National Corvette Museum in Bowling Green, Kentucky for the annual "Corvette Bash." While I was there, I took time to tour the Museum (as I do every time I am at the NCM). To my surprise and delight, I stumbled across a new vehicle on display in the Museum's rotunda. The car – a bright red DeTomaso Mangusta – was parked amongst a variety of rare and unique Corvettes.

Why, you might ask, was a 1969 DeTomaso Mangusta, traditionally powered by a Ford engine, be on display at the National CORVETTE Museum? The answer might surprise you.

Built from 1967 until 1971, the De Tomaso Mangusta was the direct predecessor to the more popular and longer-lasting Pantera. Only 401 Mangustas were built during the car's five-year production run, and of those, approximately half are still known to exist today. Both the Mangusta and the Pantera were built as a joint venture between DeTomaso and Ford. The cars were built in Italy, but were equipped with a Ford 289 cubic-inch V8 (for sale in Europe) or a 302 cubic-inch V8 (when sold in the United States.) All that is but one. 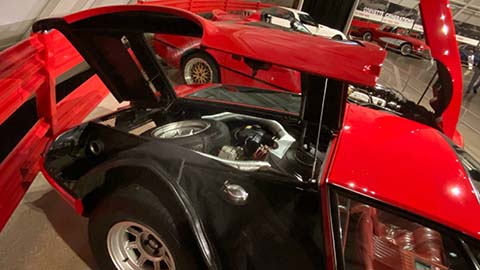 The 1969 DeTomasa Mangusta with chassis number 8MA-670 was equipped with a 350 cubic-inch small-block Chevrolet V8 engine rated at 350 horsepower – the same engine that was to be introduced in the 1969 Chevy Corvette. The car was specially built for GM's Vice President of Design, Bill Mitchell, who had previously seen the Mangusta at the Turin Auto Show in the fall of 1968. Mitchell had been so enamored with the car that he'd contacted Alesandro DeTomaso and asked him to build a special Mangusta just for him. But with one stipulation – the car COULD NOT have a Ford engine in it. General Motors would never approve of such an atrocity. Fortunately for Mitchell, DeTomaso was happy to accommodate the request and agreed to installed whatever engine Mitchell desired in his one-of-a-kind Mangusta.

Upon returning to Detroit, Mitchell contacted Zora Arkus-Duntov and told him about the car he planned to have built. He explained to Zora that he needed an engine for a car that he had purchased while in Turin, Italy. Zora was happy to oblige and asked Bill Mitchell what type of engine he wanted? Undecided, Bill said he'd let Zora know. Next he contacted Dog Patterson, chief engineer over the specialty vehicles developed in the Design Studio. Patterson had overseen the build on many of Mitchell's personal cars (there were many). Doug did some research, discovered the 350ci V8 that was being developed for the Corvette, and advised Mitchell to move forward with that. Doug felt that the lightweight engine would work well in that car, even though its horsepower exceeded the engines being installed by Ford. 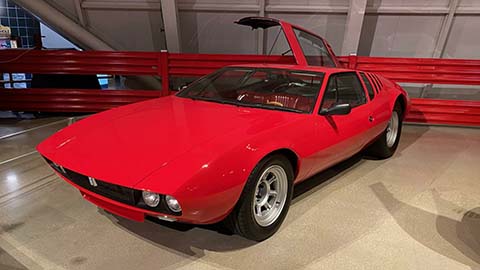 Doug further defined an engine that would work well with the lightweight (2957 pounds) and high traction that were available in the Mangusta. He asked for the 350 CID block with four-bolt main bearing caps, the 350 high compression heads, but 327 rods and crankshaft. This combination would diminish the torque but would tend to rev more quickly. The appropriate heads and a hydraulic cam and lifters were available. It was topped off with a four-barrel Quadrajet carburetor. The engine was run on a dynamometer to be checked out and then sent to DeTomaso in Modena.

The engine was shipped to the DeTomaso's facility in Moderna, Italy and the car was built around the Chevy small-block V8 engine. Upon completion, the car was transported to the United States and delivered to the Design Studio a the General Motors Technical Center in Warren, Michigan.

Bill Mitchell's favorite personal cars were always parked at the west end of General Motors executive garage. The Mangusta was no exception. The car became a sensation for all that saw it. The car's dramatic lines and exotic form captured the imagination of the Design Studio employees and would have a profound influence on every designer at GM that saw it.

Currently, Bill Mitchell's 1969 DeTomaso Mangusta can be found at the National Corvette Museum where it is on display as part of the "Cars Influenced by Chevy" exhibit.