Since its chance rediscovery in 2011, the heavily altered racecar has been the subject of seemingly endless legal twists and turns and acrimonious confrontations. 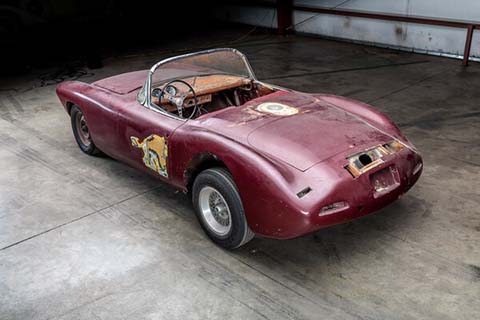 The 1960 Le Mans Corvette had been extensively modified, and painted purple, before it was auctioned in Florida on Saturday.
Credit...RM Sotheby's

The strange, serendipitous, 60-year saga of a historically significant but long-missing 1960 Chevrolet Corvette finally reached a measure of closure on Saturday with its sale for a somewhat disappointing $685,000 "hammer price" at a court-ordered auction in Amelia Island, Fla. A sales commission of about 10 percent made the final "drive-off" price $785,500.

The auctioneers, RM Sotheby's, had a pre-auction estimate of $900,000 to $1.3 million for the no-reserve sale. The identity of the winning bidder, as is customary, was not officially announced.

Corvette racing aficionados hold this car in special regard since it had vanished for nearly 40 years after its star-crossed debut at the 1960 24 Hours of Le Mans race. It has been the subject of seemingly endless legal twists and turns, and acrimonious confrontations, since its chance rediscovery in 2011.

This car was one of three identical blue-on-white Corvettes – numbered 1, 2 and 3 – which made up the "Briggs Cunningham team" of 1960 coupes sent with clandestine Chevrolet factory support to contest the French endurance classic. Although this particular car, the No. 1, and a team car crashed and burned in the race while running up front, the remaining contestant soldiered on to win its class – a milestone in Corvette racing annals. 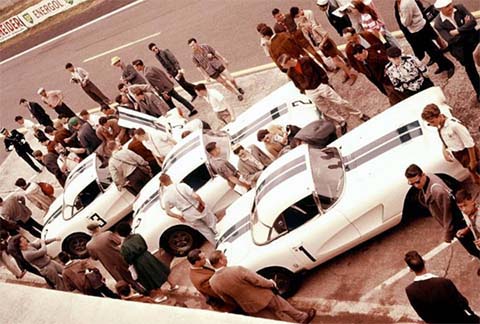 Chevrolet couldn't make much hay out of its accomplishment because the effort had been set up by rogue employees, in defiance of a corporate ban on racing. So after the race, the cars were quietly sold off to private parties. It took until the 1990s for sleuths to figure out the cars' secret Vehicle Identification Numbers. Two were then easy to find, were restored to their former glory, and ended up with a Corvette enthusiast, Lance Miller, of Carlisle, Pa. Mr. Miller arranged for a lavish, nostalgic return to Le Mans for a 50th anniversary Lap of Honor in 2010 for the extant two cars and one of the original winning drivers, John Fitch, then 92.

The third Corvette, as it turned out, had been bought by a South Florida amateur sports car racer, who inexplicably commissioned a crude reshaping of the Corvette's fiberglass body into something resembling a 1950-ish Zagato Gran Turismo. A 1970s-era V8, believed to be from a Pontiac, was also installed. It then found its way to a Tampa-area drag racer who painted it purple.

But Mr. Miller and his restoration expert, Kevin Mackay, of Valley Stream, N.Y., thought they had made the discovery of a lifetime when they responded to a newspaper ad for a "Zagato-bodied Pontiac prototype" that turned out to have the VIN of the missing Corvette. They eagerly bought the misshapen monstrosity on a bill of sale from the purported owner. 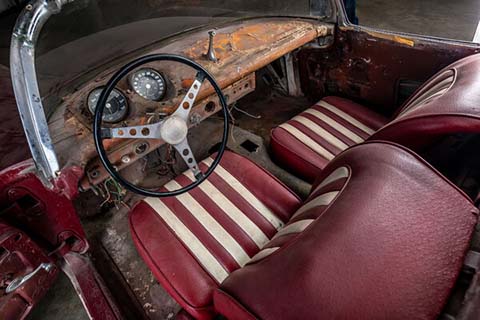 The Corvette was reshaped into something resembling a 1950-ish Zagato Gran Turismo. The purple paint came later.
Credit...RM Sotheby's 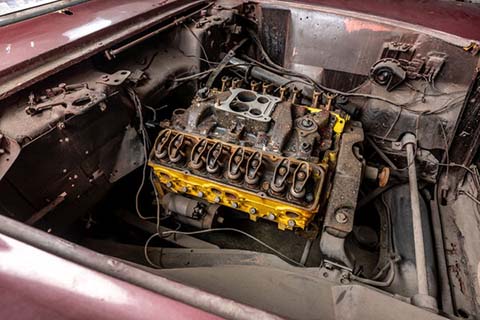 A 1970s-era V8, believed to be from a Pontiac, was installed after its Le Mans run.
Credit...RM Sotheby's

On the eve of its much-ballyhooed public unveiling in Carlisle they were interrupted by the police, armed with a Florida title and a stolen-vehicle report. A retired police officer, who was the son of the now-deceased drag racer, claimed it had been purloined from his father's yard many years earlier.

A complicated legal battle ensued. Mr. Miller wanted out of the controversy and sold his interest to Mr. Mackay, who vowed to fight to the end.

Along the way, the drag racer's son, an Indiana car dealer, a self-described Florida "treasure hunter" and others all asserted an interest in the car. At least three of them subsequently experienced financial difficulties that also brought their creditors into the picture. And it all culminated with a frustrated judge ordering the sale of the car, with proceeds to be divided among the claimants, and a clear title to be issued to the winning bidder.

Mr. Mackay, who retained rights to a 30 percent share of the proceeds, declared it the "end of a long road" for the Corvette's identity crisis. He predicted the car would eventually be restored and take its rightful place in history with its two other pristine teammates.