See the First Official Photo of the 2023 Chevy Corvette Z06

This is the first non-camouflaged image of the 600-plus-hp Corvette Z06, which will use a 5.5-liter V-8 and be revealed on October 26. 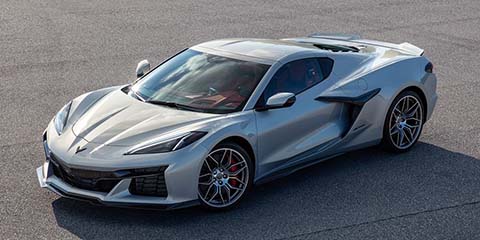 Chevrolet will debut the new C8 Corvette Z06 on October 26th, and we've heard the new high-performance variant testing numerous times. But all of those cars have been heavily camouflaged. Now the company has shared the first image of the new Z06 free of anything hiding its differences compared to the C8 Stingray.

The new Z06 will be powered by a naturally aspirated 5.5-liter flat-plane-crank V-8 that should rev to between 8500 and 9000 rpm, make over 600 horsepower, and use an eight-speed dual-clutch automatic transmission. Our spy photographers spotted Chevy testing the car alongside a Ferrari 458 Italia, which also uses a high-revving flat-plane V-8, so it's obvious what Chevy is going for with this new Corvette variant.