The first Z06 off the line was a sale for charity at the massive Barrett-Jackson Scottsdale auction. 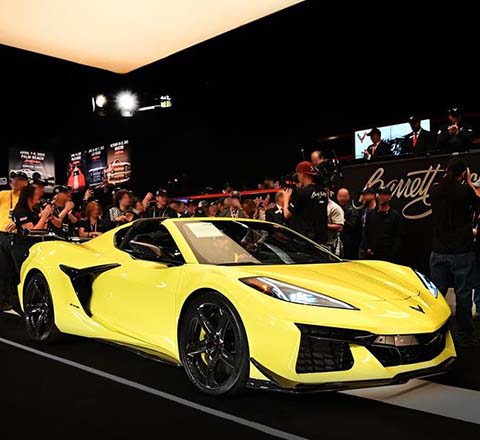 It was expected to sell for over a million dollars, but the first retail production 2023 Chevrolet Corvette Z06 70th Anniversary Edition ended up going for $3.6 million at the Barrett-Jackson auction in Scottsdale, Arizona, this weekend. That's the auction company's record for a car auctioned for charity, beating the first mid-engine Chevrolet Corvette Stingray, which sold for $3 million in 2020 to benefit the Detroit Children's Fund. Interestingly, the winning bidder was the same person for both Vettes: NASCAR team owner Rick Hendrick. 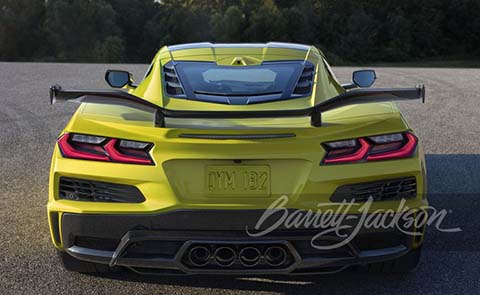 Cars like attract their fair share of attention, but there was another reason VIN #1 off the production line sold for over three times its expected value, and that's because 100 percent of the proceeds from the sale will go to Operation Homefront, a national nonprofit organization that works "to build strong, stable, secure military families so they can thrive in the communities they have worked hard to protect."

The parts used for the 670-hp 5.5-liter LT6 V-8 engine in this Corvette could be used in a race car, Corvette chief engineer Josh Holder told local ABC15 Arizona news station. That's unsurprising since this is the highest-horsepower naturally aspirated production V-8 found in any production car, ever. Production on the new Z06 will start this summer and will start at around $90,000. So it's clear this auction was as much about the charity as the car.

Operation Homefront's president & CEO, retired U.S. Army Brigadier General John Pray, told ABC15 that Operation Homefront has met more than 50,000 requests for assistance by spending a total of $35 million. Operation Homefront Tweeted out its thanks to Chevy for donating the vehicle, saying that "seeing the crowd so energized in support of our nation's military and veteran families was inspiring."