Car of the Week: This Pristine 1963 Corvette Z06 Comes With a Rare Split-Rear Window Design

Crossing Barrett-Jackson's auction block in Las Vegas, the rare and immaculately restored example has only 4,295 miles on it. 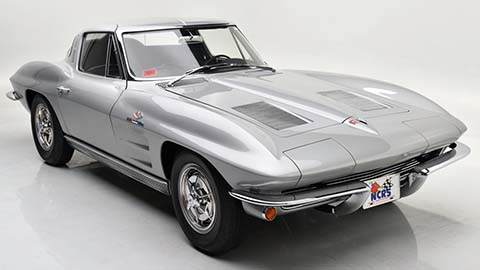 With nearly 70 years of production to choose from, Corvette fans have literally hundreds of model variants to keep straight. To help organize them, enthusiasts divide Corvettes into series, from the very first C1 of 1953 through today's mid-engined C8. Of them all, the C2 series from 1963 through 1967 comprise the true icons of the Corvette lineage.

Long before the C2 came to market, it began as a design study initiated in 1959 by Bill Mitchell, GM's vice president of styling at the time. Called the Corvette Stingray Racer, it was based on a sketch by designer Pete Brock and developed further by Larry Shinoda. It's difficult to argue that the C2 Corvette isn't the most influential and enduring US car design ever. The coupe's perfect proportions and timeless lines are as inspiring today as they were when new, and during its brief production lifespan, the C2 saw success not just in the showroom but on the track as well. 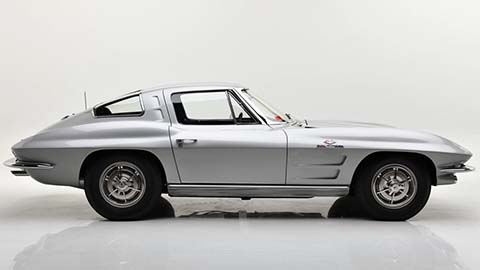 This 1963 Corvette Z06 will be presented at Barrett-Jackson's Las Vegas auction, running from June 30 through July 2.
Barrett-Jackson

As with other Corvette series, there were numerous C2 variants, generally based on engine displacement and state of tune. A 327 ci V-8 engine was offered throughout the run, while the biggest change came in 1965 with the introduction of a 396 ci big block. The latter was replaced by a 427 ci V-8 in 1966 and 1967. These cars were monsters, and while they assumed bragging rights for horsepower claims and for straight-line performance, they were, practically speaking, a bit heavy and not nearly as balanced and fun to drive as the small block 'Vettes.

It's sometimes said in business, "The first offer is the best offer." That's definitely the case with the one-year-only 1963 Corvette Stingray. For starters, it's the only model year to feature the brilliant "split" rear window, an element that Mitchell loved. Customers, however, complained about poor rearward visibility, and the feature was eliminated for the remaining years of C2 production. That distinguishing design detail may be reason enough to want a '63 coupe, and of them all, the version with the fuel-injected 327 ci V-8 and rare Z06 performance package is the one to covet. 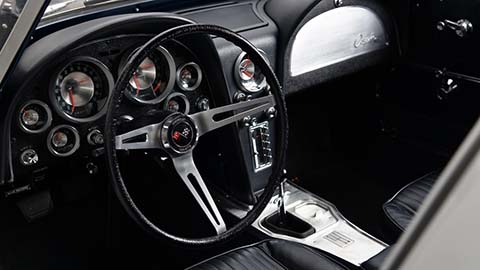 The low-mileage example is fit with an M20 four-speed manual transmission.
Barrett-Jackson

Barrett-Jackson, the auction house that garnered 203.2 million in sales at its Scottsdale auction back in January, is bringing a pristine silver 1963 Corvette Z06 to its three-day event in Las Vegas, which will run from June 30 through July 2. A star lot of the sale, the car is also offered at no reserve, certain to attract bidders for that fact alone. The 1963 Corvette was notable as the first coupe in the Corvette family, as all previous iterations were two-seat convertibles. It was also the first 'Vette with independent rear suspension and, important for track competitors, the first to offer the race ready Z06 package as a Regular Production Option (RPO).

Offered on all subsequent generations of Corvettes, the Z06 package was the work of engineer Zora Arkus-Duntov, known to the faithful as the "Father of the Corvette." Checking the Z06 option on the order sheet delivered a Stingray coupe with a host of performance enhancements. These included a thicker front stabilizer bar, larger-diameter shocks, stiffer springs and upgraded brakes. Snazzy aluminum knock-off wheels added an external cue that this was no regular 'Vette, as did a sticker price nearly 40 percent higher than the base model. 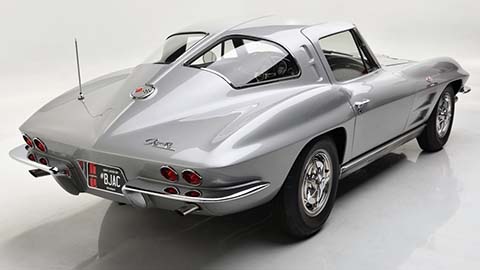 One of the distinguishing design details is the "split" rear window, only offered on the 1963 version of the Corvette Stingray.
Barrett-Jackson

The Z06 package wasn't advertised per se, and was only available with the highest-output engine, the L84-code 327 ci V-8 with mechanical fuel injection. An M20 four-speed manual transmission and posi-traction rear end helped deliver the 360 hp to the pavement. A total of only 199 examples were equipped with the Z06 package, making it a very rare C2. About the only choice left to the Z06 buyer was choosing the size of the fuel tank. This is one of 136 small-tank cars made; the remaining 63 being, you guessed it, big-tank models. 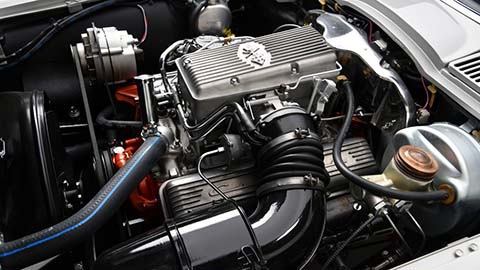 Importantly, this car retains its matching-numbers engine and transmission, which is unusual since so many classic Corvettes saw frequent motorsport duty in period, making engine replacement common. Assiduous collectors will also appreciate the original jack and set of brake air scoops. Remarkably, the consignor states that the vehicle has only 4,295 miles since new. 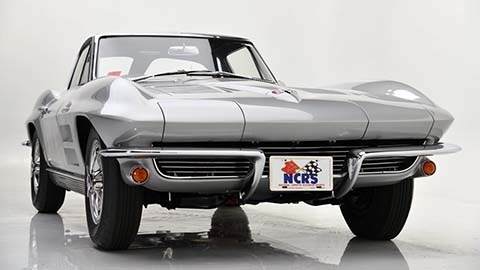 The car is a two-time winner of the Top Flight award, given by the National Corvette Restorers Society (NCRS).
Barrett-Jackson

Despite the low mileage, this Corvette has been the recipient of an open-checkbook, body-off restoration by Andy Cabral. It subsequently received Bloomington Gold Certification and is a two-time winner of the Top Flight award, an accolade given by the National Corvette Restorers Society (NCRS). A luminary in any serious sports car collection, this rare and desirable Corvette is one we'd file under the category "What's not to like?"