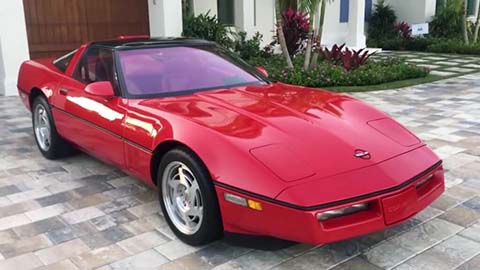 In the late March of 1987, there were rumors among the automotive press of a release of an all-new, high performing C4 Corvette ZR-1 dubbed as the “King of the Hill.” Geneva Motors launched the impressive 1990 Corvette ZR-1 model at the Geneva Motor Show. Between the years 1970 and 1972, Chevrolet released an RPO ZR-1 option for the Corvette that came with 350cc, 370hp V-8 mated engine motors along with a transistorized ignition system, a heavy-duty suspension, heavy-duty brakes, an aluminum radiator, and a four-speed gear transmission. In 1993, GM upgraded the ZR-1 to 385 pound-feet of torque, 405 horsepower, new exhaust manifolds, new pistons, enhanced cylinder heads, and revised cam timing. This year marks the 25tth anniversary of the 1990 Corvette ZR-1's market launch, and while about 7,000 vehicles were ever built, the ZR-1 remains a legendary model of the Corvette Series. One notable feature of the 1990 Corvette is its unique air management system that provides an increased power transmission by closing eight of the sixteen intake runners and fuel injection when the engine is at partial throttle. Read on to learn more about the 1990 Corvette ZR-1.

Produced between the years 1990 and 1995, the mighty Corvette ZR-1 was presented in a rather unusual engine design that was never used in any Corvette model. This new 350cc engine came with 32 valves and dual overhead cams. The car had a new sleek interior with an excellent digital dashboard, impressive handling, and a powerful V8 engine under the hood. The handling of the ZR-1 is very remarkable such that it was dubbed the absolute best-handling vehicle in the world. The inclusion of dual overhead cams introduced a new area to the Corvette series, which previously used a single cam and pushrods to run the overhead valves. In its efforts to create the fastest production car in the world, General Motors bought Lotus in 1986, and they both collaborated in combining the unrivaled V8 engine motor with the powerful DOHC engine.

However, the classic V8 and DOHC combination were too powerful to fit into the Corvette ZR-1's engine due to construction problems. The British car manufacturing brand; Lotus decided to develop a brand new V8 engine that featured very unique properties from the other GM V8 engines. This new engine design was the all-aluminum LT5 5.7-Liter V8 engine with the modern DOHC design. Moreover, to help deal with the rigidity problems, General motors upgraded the C4's suspension system and installed a ZF six-speed manual transmission and bigger tires. The styling of the 1990 Corvette ZR-1 was also impressive.

When the 4th generation Corvette ZR-1 made its first market appearance in the 1984 model year, the car's impressive handling was termed as having the best handling capabilities worldwide. However, the C4's initial 205-horsepower, 350cc V8 engine did not receive the same universal praise. Instead, this feature negatively affected the model's road performance and even its sales. General Motors began working on an in-house performance engine as a solution to these engine problems, but creating a machine that was well-suited for everyday driving needs proved to be complicated. As a result, General Motors decided to partner with the British car manufacturing company; Lotus Group back in 1985. In close collaboration with the Pontiac, Chevrolet, and the General Motors Canada (CPC) Division, Lotus built an all-aluminum-block 350cc V-8 engine fitted with four valves per cylinder and double overhead camshafts.

Lotus included two fuel injections that helped produce a maximum torque strength of 370 pound-feet and an impressive 375 horsepower to make it more efficient at powerful and low RPMs. Due to the presumed fears that the 1990 ZR-1's all-aluminum engine was not durable, a production model of the same engine was sent to a testing area in Fort Stockton, Texas. During these tests, the 1990 Corvette ZR1 set a series of incredible speed, acceleration, and durability records, covering 5,000 kilometers (4,200 miles) at an average speed of 175.88 mph. It was the impressive results of this V-8 engine that led to the rise of the nickname “King of the Hill” Corvette. In addition to helping GM build a powerful 350cc V-8 all-aluminum engine, Lotus also helped design the upgraded steering and braking system in the 1990 C4 Corvette ZR-1 car.

To improve the C4's handling, General Motors equipped it with a new chassis, massive 16″ tires, and an all-aluminum suspension system. It was also included with the steepest windshield rake seen on a production vehicle, enhanced aerodynamics, and style. Instead of the straight-on angle, the radiator was angled back for better engine cooling. Unfortunately, while its handling was better than ever before, the C4 Corvette ZR-1 featured some flaws. These included the internal problems and the use of a 298-hp V8 engine for its four-speed manual gear transmission that limited its overall road performance. Thanks to including an all-aluminum block V8 350cc engine, all these reported engine problems were solved, and the C4 was exceptionally fast for its time.

Accelerating from 0-60 mph within 4.4 seconds and covering a quarter-mile in just 12.7 seconds on the top driving speed of over 180 mph was a great accomplishment by the manufacturing company. According to Motorbiscuit, the 1990 Corvette ZR-1 was incredibly quick to set seven world and international records at the test track in Fort Stockton, Texas. With several modifications by the engineering team from Lotus Formula 1 division, the ZR-1 was equipped with the FX3 suspension system that included a gas-over-oil shock absorber with a hollow center-positioned shaft that was installed with an easily-adjustable vent to control oil flow. This new suspension setup facilitated six damping settings in each of the three driving modes; Sport, Performance, and Touring.

After the impressive 15-year run of the C3 Corvette, which was built on the C2 chassis, General Motors, in collaboration with Lotus, decided to add some improvements to the car by introducing the C4 Corvette ZR-1 in 1983. According to Sportscarmarket, the 1990 Corvette model was the best Corvette model the world had ever seen since then. The car came with new, sleek styling, a new interior with a cool digital dashboard, and the unrivaled all-aluminum 350cc V-8 engine under the hood.