Abandoned Mako Shark Concept is Restored and Brought Back to Life

This would influence the design of the C3 Corvette. 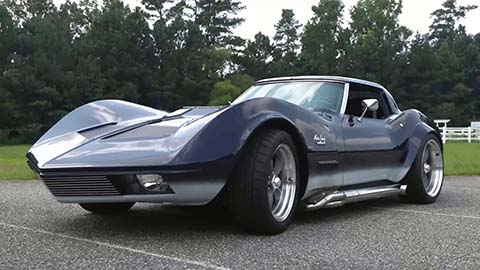 Concept cars often don't survive after an automaker is done with them. They usually end up destroyed or in a junkyard, but every now and then, one sneaks out unscathed. And sometimes, it gets left abandoned in a field waiting for a new owner.

That's what happened to the Chevrolet Mako Shark concept in the video above. John, from Roswell, Georgia, discovered the Chevrolet one day while driving, shocked that he had finally found one. He had seen the car in magazines as a kid and had always wanted one. He quickly bought it and began a thorough frame-off, ground-up restoration.

The car was in rough shape when John found it. It had been sitting for 15 years and had been in a front-end wreck. It lacked rear-end mechanicals, and the front clip was completely destroyed, forcing John to find a donor car. The restoration revamped the exterior and interior, which is mostly original, like the carpet and shifter. However, John added air conditioning and seats from the 1980s. John also upgraded the steering, added an electric fuel pump, installed modern brakes, and moved the fuel-filler cap.

Powering the Mako is a 454-cubic-inch Big Block V8 engine producing 390 horsepower (335 kilowatts). John says he likes to keep it under 60 in an attempt to preserve it, but it can pin passengers to the seats between stoplights.

Chevrolet revealed the Mako Shark II concept in 1965, and it would go on to influence the design of the C3 Corvette that would go on sale for the 1968 model year. The concept got its name from its sharp-edged, shark-like design, which took styling inspiration from the actual shortfin mako shark.