The Last Chevy Corvette L88 Ever Built Sells for $631k 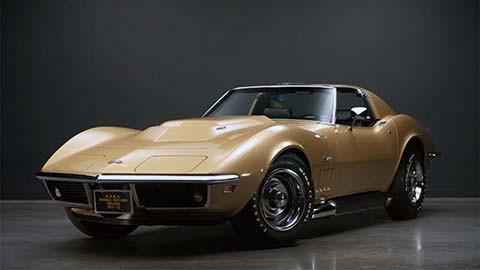 After a horrific wreck at the 1955 24 Hours of LeMans endurance race that took the lives of more than 80 people and injured well over 100, U.S. auto manufacturers came under heavy pressure from Congress to curb their racing efforts. In order to avoid government intervention, in June of 1957 the Auto Manufacturers Association passed a ban on auto racing, promotion of racing results, advertising the speed features of competition cars, providing pace cars, or otherwise marketing competition. This would have been crushing for Chevrolet’s fledgling sports car, the Chevy Corvette… that is, if any of the AMA members had bothered to abide by the agreement. 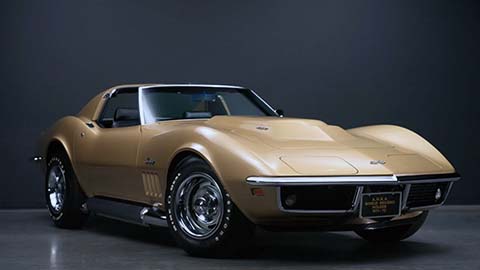 GM began providing cars to privateers via other methods, like Vince Piggins’ Southern Engineering and Development Company (SEDCO), run out of Nalley Chevrolet in Atlanta. Piggins built the Black Widow from a stripped-down Chevy 150, and wrote the 1957 Chevrolet Stock Car Competition Guide based on the Black Widow build. Zora Arkus-Duntov, head of Chevy Corvette engineering would spearhead the Corvette Grand Sport project, intended to be a run of 125 lightweight racing specials that got the axe almost as soon as it started. Only five Corvette Grand Sports made it into competition. At the 1963 Nassau Speed Week, three Grand Sports fitted with 377 cubic-inch aluminum engines putting out 485 horsepower thoroughly embarrassed the Shelby Cobras. That a cadre of Corvette engineers happened to be vacationing in Nassau that same week is purely coincidental (wink, wink). 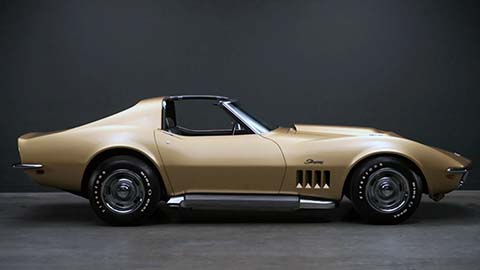 The Chevy Corvette L88 was another thinly veiled attempt to get a competition-caliber factory car into the hands of drag and road racers. The L88 package consisted of a cast-iron 427 cubic-inch engine block with four-bolt mains, forged pistons and rods, a performance solid-lifter cam, 12.5-to-one compression, transistorized ignition, and a Holley 850 CFM carburetor sitting on an aluminum intake. To avoid undue attention from insurers, the engine package was wildly underrated at 430 horsepower, five fewer than the L71. In fact, output of 550-600 horsepower was easily accomplished with a set of headers and a bit of tuning. 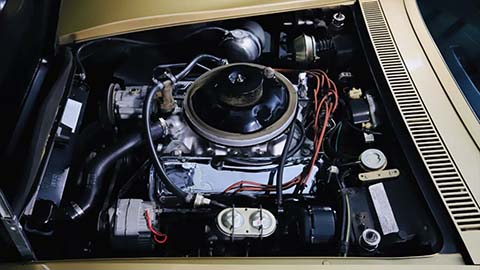 When ordering the Chevy Corvette with the L88, other mandatory equipment accompanied it. The Muncie M22 “Rock Crusher” close-ratio four-speed transmission was mandatory (at least it was for 1967; the Turbo-Hydramatic three-speed auto could be paired with the L88 beginning in 1968), a Positraction rear differential, J56 Special Heavy Duty Power Disc Brakes, and the F41 Special Front and Rear Suspension all came along with the L88. Conversely, the L88 could not be had with power steering, air conditioning, a radio, or electric windows. The L88 option was only built for three model years, with 20 units in 1967, 80 in 1968, and 116 in 1969, making it one of the rarest and most desirable production Chevy Corvettes ever. 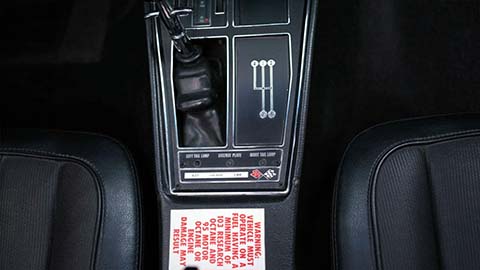 Our feature Chevy Corvette L88 is exceptional in a couple of ways. It was ordered in September of 1969, by the son of the owner of Melton Motor Company, in Belleville, Kansas. As it was ordered so late in the model year, it is the last Corvette L88 ever built. After swapping the L88 with an aluminum ZL1 427, the dealer’s son set class records in AHRA competition in 1971 and 1972 with quarter-mile times of 11.77 and 11.39 seconds and a top-speed pass of 120.16 mph at Manhattan Raceway Park. 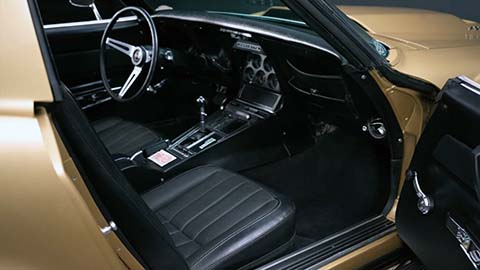 It remained titled to the dealership until it was sold to the second owner in 1982, with the original L88 back in place. It was sold to its third owner in 1988, who kept the car for 25 years. In 2010, famed Corvette restorer Kevin Mackay refurbished the L88. It was subsequently sold to its fourth owner. The Corvette L88 received the National Corvette Restorers Society Duntov Mark of Excellence Award in 2015. It has also been awarded the Muscle Car and Corvette Nationals Triple Diamond Certification, Bloomington Gold Certification, and has been selected to the Bloomington Gold Collection. In 2018, the L88 traded hands yet again. The new owner had the Corvette refinished in its original hue of Riverside Gold. It is equipped with all the mandatory equipment, as well as black vinyl upholstery, N14 Side Mount Exhaust, and the M22 close-ratio four-speed manual transmission. It shows just over 14,600 miles. 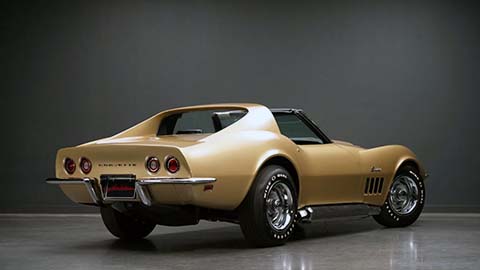 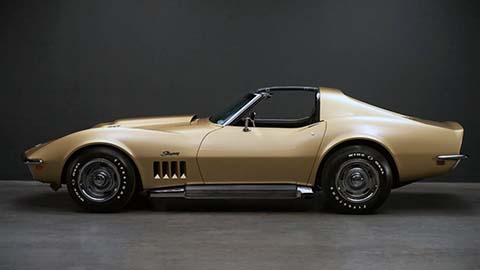 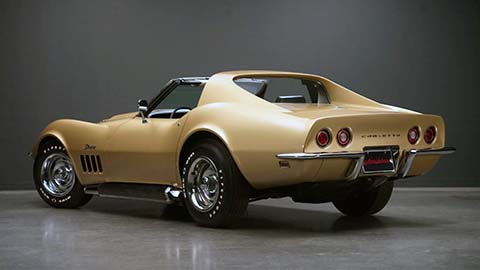 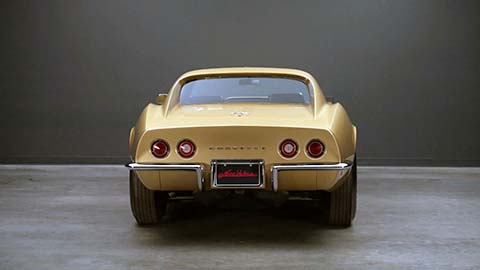 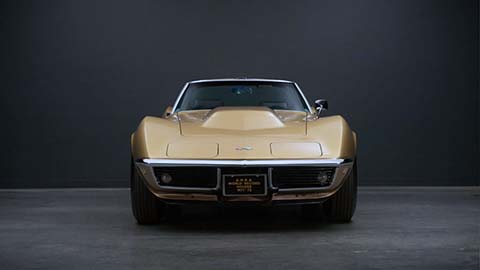 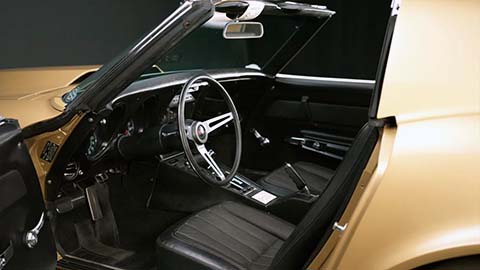 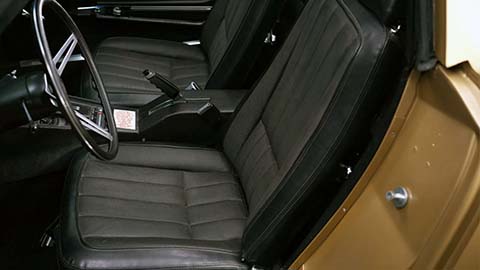 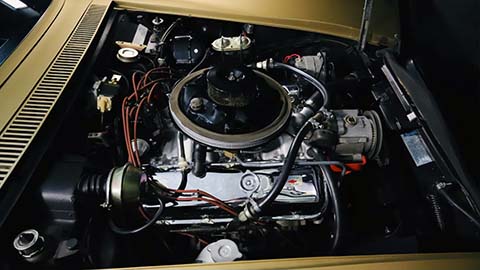