The C4 Corvette Deserves Your Attention 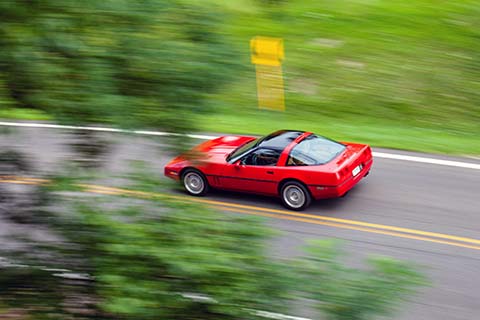 Fresh off driving the new Z06, I've been reminiscing about how Corvettes, particularly the C4 (the fourth generation, built from 1984-96), were among the first cars to shape my budding automotive enthusiasm. My dad's '89 convertible formed the center of my elementary school car universe – little did we know that our spirited Saturday back road drives in Northern Virginia would lead to my amateur racing hobby and a career writing about cars. Decades later, the C4 Corvette still represents an engaging sports car entry point. They're affordable, too, with plenty of variations choose from. 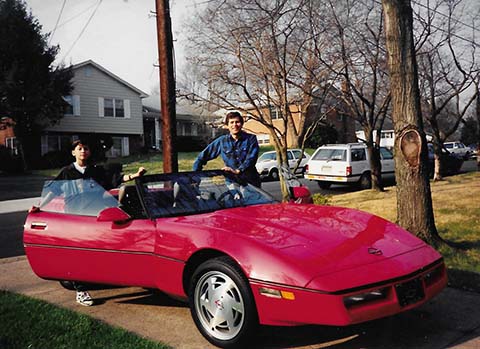 Spring, 1992. Your author and his dad heading out for a weekend drive.
Photo by Eddy Eckart

"Younger enthusiasts can easily afford a nice fourth-gen Corvette – they're fun to drive and have good performance even by today's standards," said Harlan Charles, Product Marketing Manager for Corvette and Camaro, over breakfast ahead of the new Z06 drive. Charles owns a 1990 Corvette six-speed Z51 in white with a slate blue interior, and it's been around the block a time or two – since new, he's driven it through 49 states and most of Canada's provinces.

Why do C4 Corvettes remain so reasonably priced? A big part is because Chevy made so many – 358,180 over the 12-model-year run – but that doesn't tell the whole story. "When you build a boatload of cars, most of which have been cared for better than your average commuter over the years, you have a supply that generally meets the demand," said Greg Ingold, Editor of the Hagerty Price Guide. "There are enough of them in good shape that if you're in the market, and you don't like the first couple you look at, there's probably another six to choose from that meet your criteria at a similar price point." 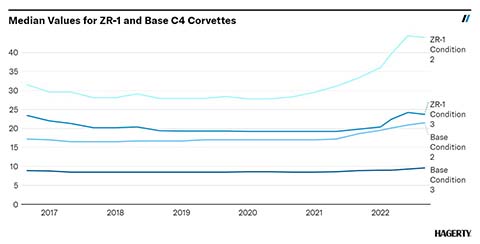 That wealth of quality cars to choose from has created what seems like a permanent buyer's market for the C4. Even with recent valuation increases, solid drivers with low-ish miles and no major needs can be had for well under $20,000. Of course, newer and more desirable models will fetch more than the median prices. For example, as of our most recent Price Guide update, 1995 ZR-1 (the last year of the famous "King of the Hill") is valued at $27,600 in #3 (Good) condition, well above the median #3 value of just $9600 for base C4s. Nonetheless, with values of other marques from the same era seemingly going off the deep end, a driver-quality, 405-hp '90s classic for under $30,000 presents a solid deal.

Having spent a day and a half with a 1990 ZR-1 recently, I can attest that Charles is right – C4s represent incredible sporting bang for your buck. The chassis is nimble, the controls well-weighted, and the LT5 engine eagerly winds out to 6500 rpm. That said, the base L98 and LT1 engines in the base cars don't disappoint, either – what they lack in rpm compared to the ZR-1 mill, they make up for in low-end torque and ease of maintenance. The '84-89 and '90-96 interiors each offer distinct period GM futurism, which has its own unique appeal. 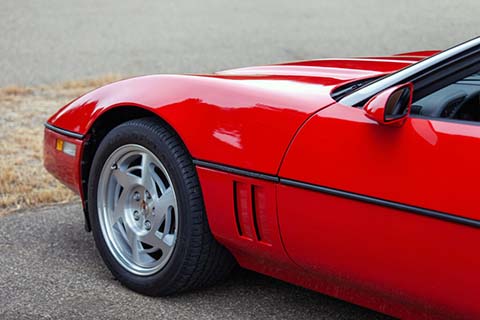 What should you look for if the C4's slick looks have caught your eye? While not an exhaustive list, here are a few things to think about: early cars had a reputation for riding a little rough, though they received incremental improvements over the years. And though that period GM futurism gives them a unique look, C4 interiors also came with period GM squeaks and rattles.

Selective Ride Control debuted in 1989 as an option on the base car, and was standard on all ZR-1s from 1990-95. These three-way adjustable Bilstein dampers offered a tangible difference in ride quality, allowing you to toggle between a softer touring setting or two degrees of added firmness when you needed it. If you wanted full-time performance handling, you ticked the box for the Z51 package. Although only available on the coupe and varying in its contents by year, Z51 typically provided stiffer shocks, springs, and sway bars along with additional cooling capability, performance tires, and steering tweaks. The ZF six-speed transmission, also introduced in 1989, improved the shifting experience markedly from the prior Doug Nash 4+3 unit. The LT1 engine fired up in 1992, cracking the 300-horsepower barrier in a base Vette for the first time in 20 years. Convertibles also reemerged after a ten-year hiatus in 1986. Looking for something a little hotter? Chevy's in-house ZR-1 (1990-1995) and Callaway's twin-turbo Corvettes exemplify the era's American entry into the supercar space.

Expect to pay a premium for certain options: the Z51 package is typically worth an additional $500, as is a glass targa roof on coupes. Hard tops for convertibles fetch an additional $1,000, and special editions, like the 1993 40th Anniversary cars or the 1996 Collector Edition are valued at an additional $3,000 ($7,500 for Anniversary ZR-1s). Automatic cars typically command 8-10% less than a similar manual-equipped 'Vette.

Despite its relative affordability and being a product of the '80s, interest in fourth-gen Vettes still skews surprisingly older. Looking at quotes across the last three years, 27% come from Gen X (who are 32% of the market as a whole), 12% comes from Millennials (who are 21% of the market), 7% comes from Gen Z (who are 7% of the market), and 46% comes from Boomers (who are 35% of the market). Time will tell if the popularity of all things '80s and '90s will begin to draw younger interest to the C4, but we've been wondering that for a while now. Till then, there are plenty out there for the taking. 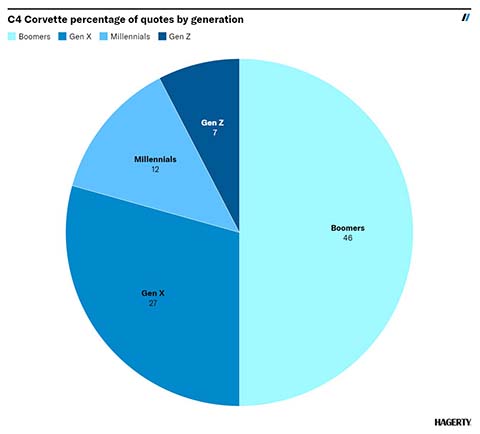 What would I choose? I'd look for a red '89 just like my dad's, but mine would be a coupe with the six-speed and Selective Ride Control. The L98's 245 hp is plenty, and I like the look of the pre-1991 facelift cars. Whatever model or trim strikes your fancy, the C4 Corvette will give you of-its-era character in a platform that's still fun today.