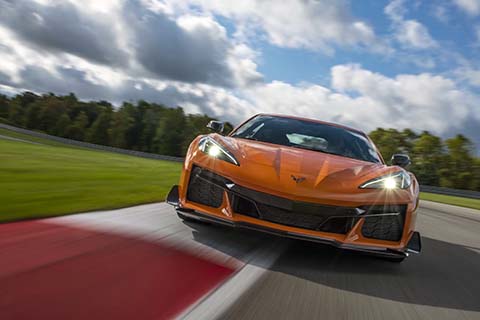 When the Z06's new LT6 V-8 fires up, I can't help but grin at its bark. Then ... I wait, snug in the driver's seat. Another wave of thick, heavy rain splatters on the tarmac of Pittsburgh International Race Complex.

In some sense, we've been waiting to drive this car for decades. A mid-engine Corvette designed for the race track has been on Chevrolet's to-do list since Zora Arkus-Duntov's early days with Corvette, yet it never materialized for real. The base eighth-generation Corvette (C8), while excellent in its own right, merely whet our appetite for what everyone knew was coming. We practically salivated when the new Z06 finally broke cover last fall, and with production now underway, we've gotten our chance to chow down. 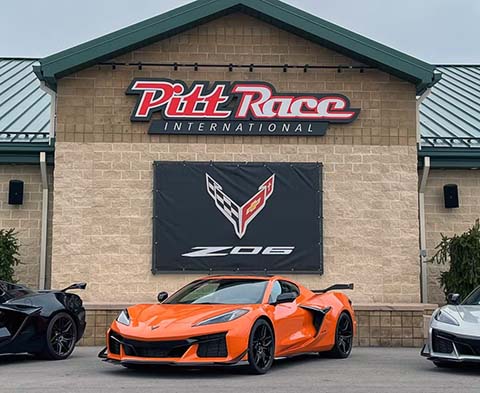 Once there's a break in the storm and just enough of a dry line on the track, I venture out of the paddock. PittRace is a challenging course under the best of circumstances – a 2.78-mile mix of esses, plunging and soaring elevation changes, and straights long enough to savor the Z06's IMSA-worthy downshifts into braking zones. Here in the wet, a track like this can highlight a car's chassis dynamics if you're willing to push it, and doing so can also lay bare any dirty secrets.

Tap into the throttle for the first time, however, and everyone within earshot will know: this LT6's wail yields a Corvette like none other. As much as the switch to a mid-engine platform for this generation dramatically altered the character of America's sports car, Chevy's flat-plane-crank engine adds a uniquely visceral persona.

The flat-plane-crank, dual-overhead cam engine finds 8600 rpm faster than any 5.5-liter V-8 has right to. I'm already going that fast?" is something I find myself thinking over and over. There's no turbo-torque brutality, no silent-electric-tunnel-vision-warp: just rocket-like thrust, delivered across a linear powerband, put cleanly to pavement. 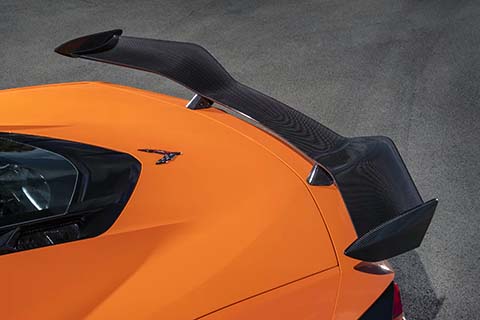 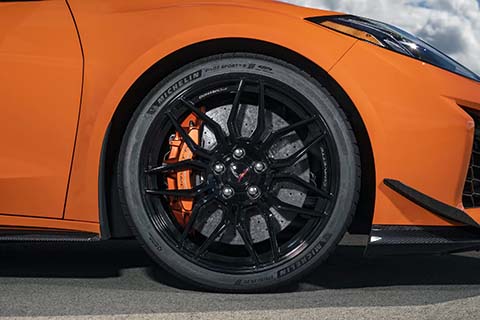 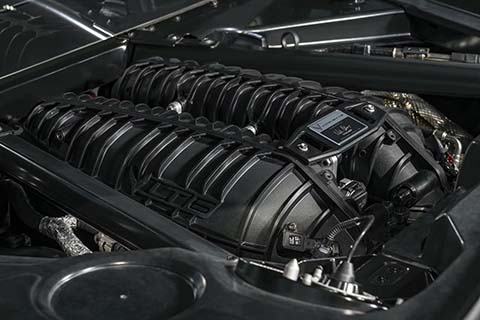 Paired with the LT6 is an eight-speed dual-clutch automatic transmission similar to that of the base car, albeit with a shorter (5.56) final drive ratio and upgrades to the case as well as clutch and lubrication systems. Left in full auto mode on track, the transmission pops off crisp but not harsh upshifts at redline and finds the right gear in every braking zone. In manual mode, using the Corvette's paddles, shifts are immediate and smooth.

In the run-up to the Z06's production, much of the coverage has fixated on the engine. That's justified, since it's a masterpiece – the highest-output naturally aspirated V-8 in production-car history. (You can read our full engineering breakdown of it here.) But what really stuns me, on this damp track, is how composed the chassis feels. The C6- and C7-generation Z06 Corvettes demanded respect because their control, especially at the limit, was not always on par with their power. This C8 Z06 will still bite you if you're not careful – it is a 670-hp big-tired mid-engine monster, after all. Yet it's a well-trained monster. Turn four, a varied-camber downhill right-hander, requires very precise throttle application on exit. On one lap, my foot is more two-pound hammer than the eight-ounce mallet the corner calls for; in that moment, the heavier rear end steps out. In a split second I visualize a stern talking-to from Corvette Executive Chief Engineer Tadge Juechter. Instead, two decent flicks of counter-steer and a little throttle modulation straightens it all out. Wow. This chassis is good. 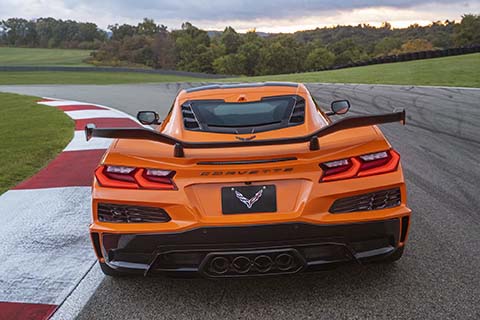 Chevy's Performance Traction Management (a sliding scale of computer-controlled stability intervention) wasn't fully off during my laps, and I'm certain it would have chimed in had I induced too much yaw. Still, a balanced, forgiving chassis provides a lot of confidence to explore this car's capabilities. This is not true of all prior Z06s.

The chassis likewise exhibits impressive balance through the sequence of esses at PittRace. Set on full stiffness, the steering feels properly weighted and beautifully transmits tire/tarmac conversations. The car transitions side to side with particular poise. There's a certain tautness to the chassis during lateral weight transfer – enough to confidently initiate quick-pitch changes like you would in a race car. The throttle's long travel and exacting precision allows you to adjust the front/rear balance seemingly by the gram.

Damp straights on track require longer, more deliberate brake zones, so I don't get anywhere close to limits of the carbon-ceramic brakes. Nonetheless, the brake-by-wire system provides confident pedal feel. I prefer the middle setting over full firmness, but drivers will appreciate the adjustability. 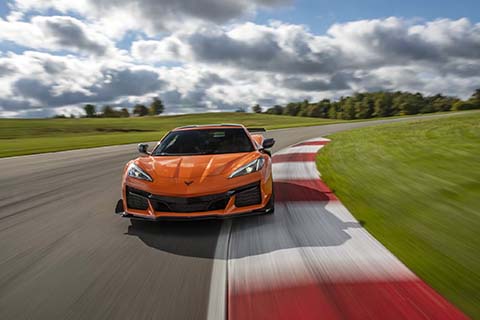 In the brief window where there was decent grip on track, the Z06's personality rose to the surface. Nail corner entry, roll into that howl-inducing throttle to hit the apex at the edge of adhesion, and the Z06 screams toward corner exit. That apex-to-track out acceleration, carrying lateral momentum while warping forward amid primal sound and speed – that's when I realized it. To extract everything out of the Z06 is to bring the best driver out of yourself. This is not one of those supercars where you're just strapping in for the ride and letting computers do the hard work. That challenge – and the reward when you meet it – is why you buy a car like this.

Not every corner will yield moments of nirvana, especially on the street. And the elements that produce a track darling don't often translate in a more docile environment. In order to sample the Z06 in the fashion the overwhelming majority of owners will use it, I spirit away a black 3LZ Convertible Z06 for a two-hour loop through Western Pennsylvania back roads. 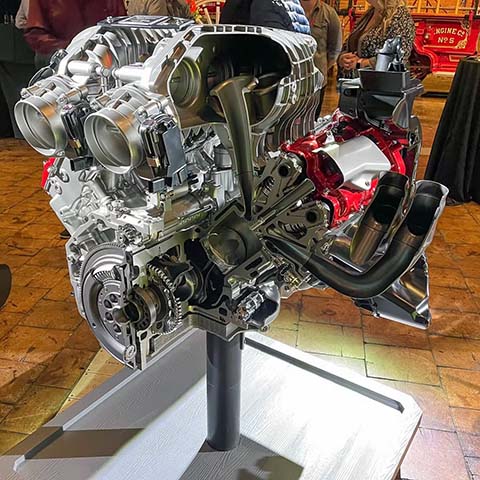 Whether you have the top down or up on the street, there's no question that the engine's the star of the show. The flat-plane crank/dual-clutch pairing makes you want to play with the paddles all day long just to hear the rev-matched downshifts and the instant-rpm-reset upshifts. Choose wisely where you let the Z06 play the song of its people, though; it's sure to draw attention. You can always put the car in stealth mode to close the exhaust baffles if your neighbors aren't the sort to appreciate this fine Bowling Green melody.

If you're a stop-light racer, be aware that off-the-line torque feels slightly less potent than in the base car's pushrod engine (they both make 470 lb-ft, just at different rpm: 5150 rpm in the LT2 and 6300 in the LT6). But the theater in the Z06 makes up for this perception. Likely due to its large displacement for a flat-plane crank engine, it is perfectly tractable around town.

My primary concern going into my road drive was that the pixie dust magic I felt in the Z06 on the track would take away from the base C8 Corvette's incredible touring capability. With 30 percent stiffer springs than the Z51-package car and unique magnetic damper tuning, the Z06 with the standard FE6 suspension ought to be an excessively firm-riding car. And yet, it isn't. You don't forget what you're in – the Z06 is definitely stiff. (The more track-oriented Z07 package with FE7 setup – curse GM's alphanumerics – is stiffer still.) But it's never harsh, and the suspension doesn't crash over potholes or expansion joints. Only once in the softest mode (Tour) does the car get flustered, thanks to some small, high-frequency bumps. The large 275-section front and enormous 345-section rear Michelin PS4S tires do not tramline or dramatically pull the car on crowned and sometimes rutted asphalt of the Pennsylvania mining roads we traverse. Even the stiffest suspension setting – which really isn't necessary on the street – isn't punishing. 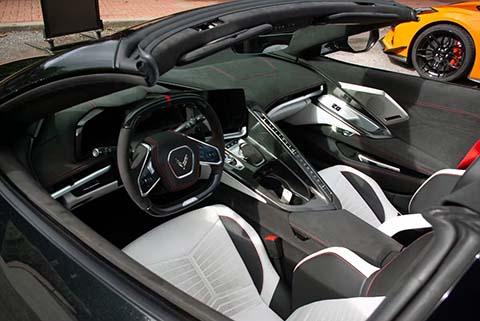 Of all the numerous settings available to configure, only one stands out as not suiting the car's personality. Tour mode's default steering was so light that I found myself constantly making minor adjustments. On a car so dialed in, light steering weight transfers every tiny hand motion to the rack. Fortunately, it's easily solved by switching to the customizable My Mode and manually setting the car to soft-riding Touring spec but with heavier steering.

Park a base C8 next to a Z06 without an aero package and most of the differences are subtle. You notice the added width first – 3.6 inches at the back of the car. The revised side intakes look like they've been pulled off an F35 fighter jet, but overall the Z is cleaner. The angle of the front fascia's strakes between radiator openings are reversed and now flow with the lines of the headlights and the creases on the hood. Whether you get the standard forged aluminum or the optional carbon-fiber wheels (the latter alone shaves 1.5 seconds per lap on a two-minute circuit), the rollers are more aggressive and motorsport-oriented. At the back, a center-exit exhaust system (thankfully) replaces the awkward square-tipped corner exhaust from the base car. 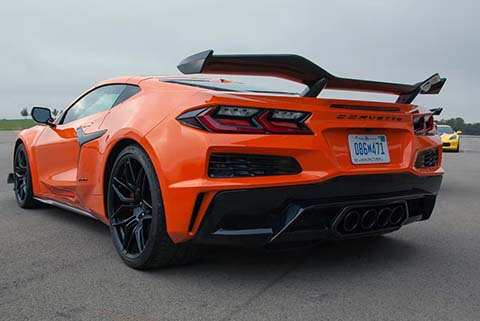 Add the optional aero package to the Z06 and the supercar vibe comes alive. The rear wing, chin spoiler, and canards – all carbon fiber – integrate well into the design and amplify the car's visual character.

The interior is mostly carried over from the base car, excepting a different door stitch pattern, Z06 badges on the door sills and waterfall, and a detailed image of the engine on the screen at start up.

Extensive personalization has become a much more integral part of the Corvette formula than in previous models. Chevrolet noticed how much buyers appreciate these custom touches, and I can only assume GM is happy to reap the same kind of profits that Porsche and McLaren have enjoyed from similar programs. Previous Corvettes waded in that direction with carbon packages and anniversary editions, but this Z06 is the first 'Vette to dive fully into the deep end. Both coupe and convertible are available with the Z07 package, which adds the carbon wheels with Michelin Cup 2R tires, carbon-ceramic brakes, stiffer springs with unique magnetic damper and steering rack tuning, and a full aero package that includes a dramatic rear wing. Add in a massive variety of colors across the interior, exterior, wheels and calipers, and it makes for a Z06 that can either be understated, ostentatious, or somewhere in between. Think Porsche 911 GT3 or GT3 Touring, but with a much broader spectrum of performance from the standard Z06 to the Z07. 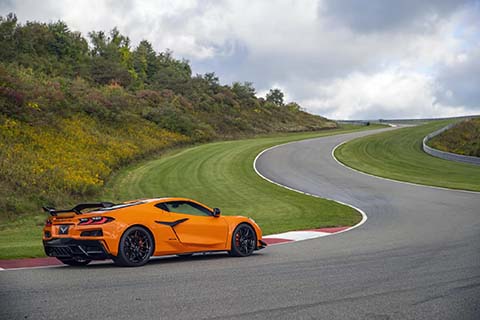 Many of those GT3s spend their lives tooling around places like Los Angeles, flaunting their wide fenders and sticky rubber to dinner and back. There's a good chance you'll see a lot of track-spec Z06s meet a similar fate, and that's OK. The more Corvettes that sell, no matter how they are used, justifies their continued existence. That said, if you're taking a look at a Z06, build it to how you're going to use it. The options are there to make it your own.

The popularity of the 2019 ZR1 (starting at about $120,000) proved Corvette fans are willing to pay up for something special. With the Z06, the Corvette team took a solid base car, walloped it with a joy-inducing engine, a highly advanced suspension, and a wide array of options. It's the most capable and configurable Corvette ever. The mid-engine Z06, some sixty years in the making, was worth the wait.

Highs: Incredible engine. Excellent on track without penalty on the street. Character galore.

Lows: Ingress/egress can be tricky. Tour Mode steering is too light ... and that's it.

Takeaway: The most capable Corvette ever sets a new benchmark for the American supercar.