General Motors has just lifted the veil off the 2024 Corvette E-Ray hybrid, officially revealing the new C8 Corvette variant to the public. GM Authority has been closely following C8 E-Ray news, including leaked interior colorways and the foreign market availability. Now, 2024 Corvette E-Ray pricing has finally been announced alongside the official reveal.

For further comparison, the 2023 Corvette Stingray in 1LT Coupe form has a starting MSRP of $65,895, while the C8 Stingray in 3LT Convertible specification comes in at $84,845. 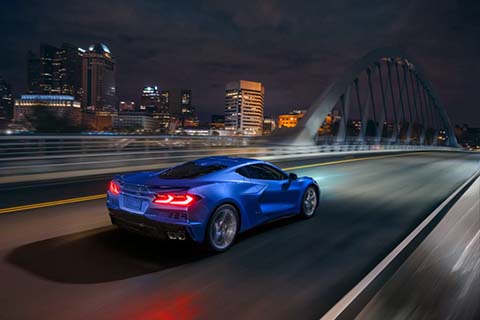 As a reminder, the 2024 Corvette E-Ray is the first Corvette to feature powertrain electrification and an all-wheel drivetrain. The naturally aspirated 6.2L V8 LT2 engine, which produces 495 horsepower and 470 pound-feet of torque, is complemented by an electric motor on the front axle. This supplemental electric motor develops an extra 160 horsepower and 125 pound-feet, bringing total output to 655 horsepower. To put the power to ground, a new variant of the Corvette C8’s dual-clutch, eight speed automatic transmission (RPO code MLH) is now offered exclusively with the E-Ray.

Under the skin, the C8 E-Ray rides on the GM Y2 platform, which it shares with all C8 variants.

The hybrid Vette will go on sale in late 2023, and will be built alongside the Stingray and Z06 models at the GM Bowling Green plant in Kentucky. Visually, the C8 E-Ray shares the C8 Z06’s wide-body treatment, along with body-colored accents and carbon flash badging as standard affair.