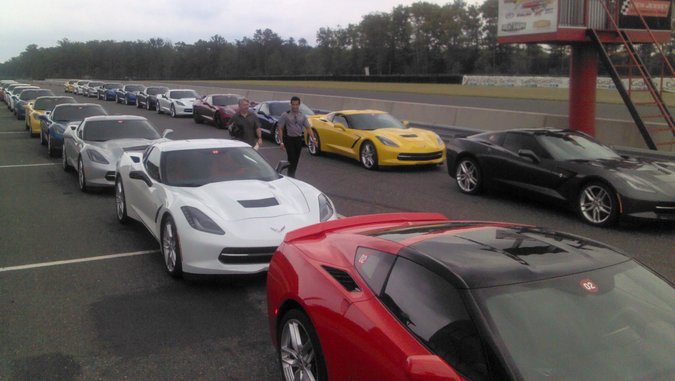 MILLVILLE, N.J. – There is probably no better way to sell sports cars than to get people talking about how hot they are on a track. Last week, more than 170 people statistically selected by Chevrolet were able to do just that, getting to drive the 2014 Chevrolet Corvette Stingray at New Jersey Motorsports Park.

Chevrolet joined with the driving school Hooked on Driving to host the Corvette Track Experience, which was also held at four other tracks around the country – in Chicago; Sonoma, Calif.; Fontana, Calif.; and Jupiter, Fla. – with a total of nearly 700 participants.

The event featured three track sessions for each driver. The cars were equipped with the 7-speed manual transmission or the 6-speed automatic transmission with paddle shifters. Each session was, theoretically, run with increasing speed (with the exception of the last one, which was run in a pretty substantial downpour). Participants followed instructor drivers in groups of four.

Steve Martin, a spokesman for General Motors, said that, using Polk data, the company chose participants who might like to make a switch from another type of sports car to a new Corvette. 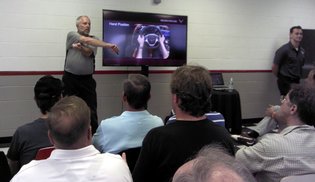 At the New Jersey event, the people who attended were not a collection of Porsche and Ferrari owners. The parking lot outside the track had a couple of Porsches, some older Corvettes and an Aston Martin, but there was also a Mazda RX-8, a battered Nissan 240SX, an ‘80s Alfa Romeo GTV6 and a few Hondas.

A brief poll of several participants revealed that they did not know why they were chosen. The letter that most of them received, Willy Wonka-style in the mail, read, "The track is waiting for you," along with instructions of when and where to show up.

"I don't even know why they invited me, but I wasn't going to turn them down," said Joe DiLuzio, a Federal Aviation Administration engineer of Somers Point, N.J., although he had bought a 2008 Corvette last year.

Glenn Sincovich, 21, a mechanical engineering student at Temple University, said that his mother, who had bought a Chevrolet years ago, received the invitation in the mail and gave it to him. He said that he couldn't buy a $65,000 sports car while he's still in school, but that he appreciated the opportunity to drive one.

Tom Kraemer, a retired architect from Stone Harbor, N.J., surmised that he had been contacted because he had rented a Corvette a few years ago. His only car is a Honda CR-V.

"I would never have considered a Corvette before, but I think that if I got one, I could go to the track and find it," he said.

The program included the track sessions and classroom time. After some of the track safety announcements, the bulk of the indoor sessions were dedicated to G.M.'s product development representative, who talked about the Stingray's features.

In general, people seemed to be pleased with the car, saying that nothing, including the interior, which has long been a weak point in Corvettes, seemed to have been overlooked by Chevrolet, although some participants expressed concern about the car's electronic control features.

"The car really, really impressed me. I kind of want one," said Bradley Price, a fan of Italian cars. "It was so easy to drive at speed, too. I do feel like the electronic nannies make it maybe too easy to be a hero on track without you really learning to drive the car properly. You can mash your foot down midcorner, but the car won't accelerate until it is pointing fairly straight."

Vincent Tripicchio, a real estate business owner from Moorsetown, N.J., said, "There's no question that this is the best car in the world for the money. There are no shortcomings like in other generations."

Others –Porsche guys, no less – also took home a favorable impression of the car. Bob Tulipan, a music executive of Verona, N.J., who bought a new Porsche Cayman a few months ago, said he has owned Corvettes and that the new one surprised him.

"I want Chevy to do this right," he said. "It reminds me of when Ford took Ferrari's refusal to work together at the track and turned it into a Le Mans win with the GT40."