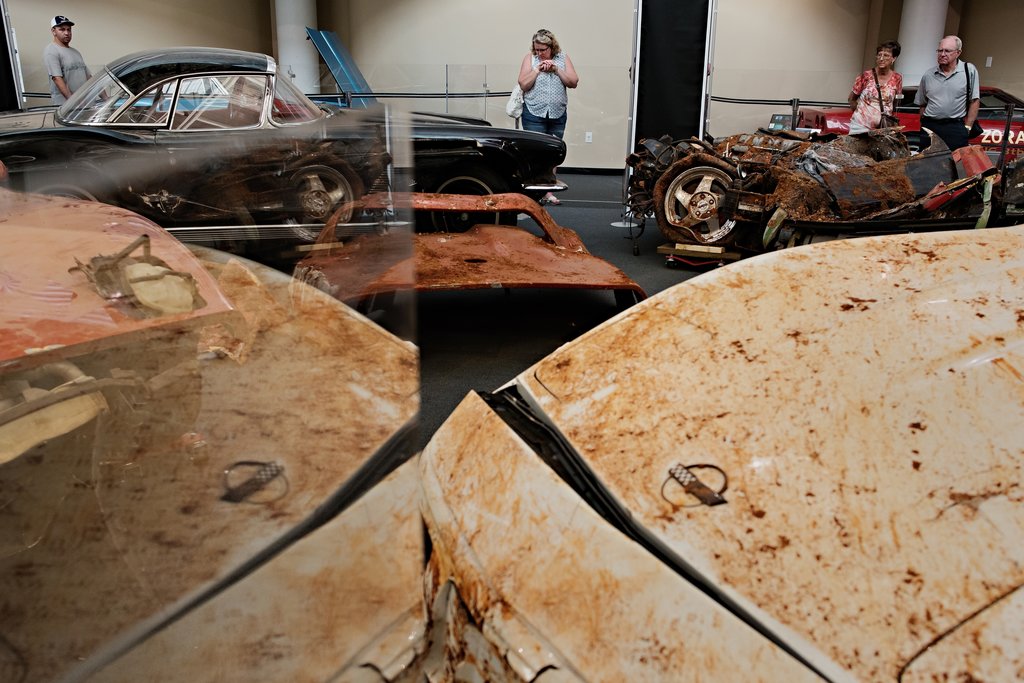 The news worsened as salvage crews plucked the buried autos from the chasm. A 2001 high-performance Z06 was twisted into an unrecognizable pretzel, shorn of nearly all its red, sheet-molded compound body. Another casualty, though less severely damaged, was the white roadster that had rolled off the assembly line in 1992 to become the nation's one millionth Corvette.

Since then something unexpected has happened: The sinkhole became the museum's hot new tourist magnet. Droves of travelers who might otherwise have had little interest in the museum and its four-wheeled exhibits began showing up to see the site of the natural disaster they had heard about on the news.

Attendance is up 59 percent since March compared with the same period last year, museum officials said, and sales at the museum shop and cafe are also showing double-digit increases. In May 2013, the museum pulled in about 9,000 visitors. This May, it drew more than 17,000.

The unexpected reversal of fortune has posed a difficult choice for museum officials, torn between continuing to keep the financially rewarding sinkhole intact or to fill in the huge cavity and return the showroom to its fundamental mission of displaying prized Corvettes.

At a closed meeting on Wednesday, the museum board chose to pursue a middle ground by voting to preserve a smaller portion of the hole, although members delayed a firm decision pending further review.

The plan calls for an opening of approximately of 25 feet by 45 feet and a depth of 30 feet with views into part of the cave. It could also include a dirt embankment where one or two of the cars could be placed for display, according to a museum news release.

That approach was favored over leaving the sinkhole as it is or filling it in and restoring the display room to its original condition.

"We have to look at creative ways to generate interest in the museum," said Wendell Strode, its executive director. "It would be so much easier to just be a regular automotive museum with our Corvettes on display, but we have to think outside the box."

The board meeting came after weeks of prolonged debate within the world of Corvette aficionados, including concern that the sinkhole, despite its surprise popularity as a tourist draw, was distracting from the 20-year-old museum's core principle: to celebrate the history of one of America's most storied cars.

"On the one hand it's been really good for business, and the publicity it has gotten you can't buy," said Katie Frassinelli, marketing and communications manager for the museum. "But on the other hand, at some point the novelty of it will wear off, and we don't want to be known as Sinkhole Museum forever."

Distinguished by its yellow conical Skydome roof and 12-story red spire, the museum sits at the northern edge of Bowling Green, 60 miles north of Nashville. Another local landmark is the nearby General Motors Corvette assembly plant, which moved to Bowling Green from St. Louis in 1981.

The museum was closed and empty of people when the roof of one of the many caves in this part of the state (Mammoth Cave is just 30 minutes north, off Interstate 65) gave way under the floor of the building after 5 a.m. on Feb. 12. The cave is believed to be perhaps thousands of years old, but museum officials were unaware of its existence.

Twenty-seven Corvettes were on display in the Skydome Building when the ground opened a 40-foot-wide hole, sucking in eight of the cars while sparing the remaining 19.

Two sinkhole cars – a 1962 tuxedo black model and a 2009 ZR1 "Blue Devil" – escaped relatively intact. But others sustained extensive damage, including two or three that looked as though they might have been hurled into a junkyard car crusher.

The 2001 Z06, once a 700-horsepower racecar, was barely more than a twisted frame. A multi-ton slab of concrete sheared off the rear end and crushed the top of a 1984 orange Corvette that once served as a pace car in the PPG IndyCar World Series.

The news touched off an outpouring of support.

When Lynda Patterson of Louisville, Ky., saw televised images of a ruby red 40th anniversary 1993 Corvette buried in the debris, she donated her own 40th "Ruby" to the museum. She and her late husband, Mike, bought the car 22 years ago.

But the news also brought a new audience to the museum.

"We're seeing a different visitor than usual," Ms. Frassinelli said, noting that pre-sinkhole visitors were typically automobile enthusiasts, many of them Corvette owners or would-be owners.

"But now, because of that sinkhole, we're getting a lot more general tourists," she said. "You get an overwhelming number of them who make comments like, 'Oh I've driven by here and never stopped, but I really wanted to come see the sinkhole.' "

Museum officials responded by embracing the sinkhole as one of its showcase attractions along with a nearby display of the since-retrieved cars, now called the "Great 8" or the "Sinkhole Corvettes."

There appeared to be substantial support among museum visitors for leaving at least some of the sinkhole intact, judging from cursory interviews.

Jamie Tyler of Olney, Ill., said, "I think it's important to see what nature can do."