A Car Display Complete With Pothole 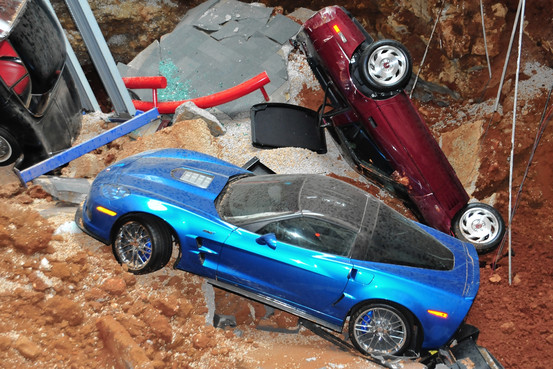 The scene in February after a massive sinkhole opened directly below the museum's skydome, swallowing eight of its vehicles. National Corvette Museum

Bowling Green, Ky. - The National Corvette Museum, the 115,000 square feet of space dedicated to the history of the car General Motors has long called "America's only sports car," has consistently been one of the best museums devoted to just one model. But this year there are two compelling reasons to come here: the museum's 20th anniversary, and the sinkhole.

You may recall that in February a sinkhole unexpectedly opened up directly below the museum's skydome, taking eight of the museum's cars with it. Although the story was widely reported, it's quite something else to peer into the hole yourself and see the damaged cars that have since been salvaged.

Even the dimensions – roughly 45 feet wide, 60 feet long and 30 feet deep – don't give you the sense of utter devastation that you get standing next to this yawning abyss, which the museum has kept open. The word "sinkhole" doesn't do it justice. Like the 400-mile cave network a half hour from here, the sinkhole is truly mammoth compared with what most people imagine it to be.

"It's humongous," exclaimed Laurie Stalheim, a Chicago tourist who found the sinkhole the most fascinating part of the museum. Many agree with her; attendance is up 63% from a year ago.

Then there are the cars that were damaged. Some, like the 2009 ZR1 Blue Devil, have just a few dings and dents. GM plans to take the car away in early September and fix it. But then there's the 2001 Mallett Hammer Z06, a 700-horsepower custom model that was donated to the museum last December by Florida collector Kevin Helmintoller. The last car to be brought up out of the hole, it's nothing more than a twisted hunk of metal. Looking at what's left, it's hard to believe it was once appraised at $125,000.

Guests can now view the sinkhole and the eight damaged cars on display nearby. What happens after the 20th anniversary celebration that began this Wednesday is still up in the air. If spokeswoman Katie Frassinelli had her way, the museum would restore only two of the least-damaged cars – a 1962 black Corvette and a 1992 white model, the millionth Corvette to be produced. As for the sinkhole, the museum board will decide what to do at a future meeting. Work is slated to begin sometime this fall and the museum is unsure if it will keep the area open to the public during restoration, she said.

Even if this corner of the museum is closed during construction, there is still much to see here.

The Corvette actually made its debut at the 1953 GM Motorama, the travelling car show that the auto maker took across the country from 1949 to 1961. Dubbed the "Project Opel" by legendary designer Harley J. Earl, the first Corvette came off the production line on June 30, 1953, in Flint, Mich. A year later, production moved to St. Louis, before moving again in 1981 to Bowling Green, where the cars are still made today. 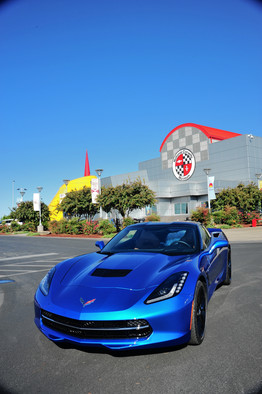 That first model year, the car was available only in white with red interior and a black canvas top. It had a two-speed automatic transmission and a base price of $3,498, or about $30,500 today. Car No. 3 off the production line, which was put through a series of GM performance tests in 1953, sold in 2006 for $1 million.

Initially, the Corvette was more about style than substance. That first model year, GM made only 300 cars and made sure most of them ended up in the garages of Hollywood A-listers, musicians, generals and Fortune 100 executives, a marketing ploy to build buzz around the car.

The Corvette might have remained nothing more than a niche product to goose Chevy sales if not for a Belgian-born engineer named Zora Arkus-Duntov. He saw the car at the 1953 Motorama in New York and promptly sent a note to Chevrolet chief engineer Ed Cole. Zora, as he is known in Vette circles, was impressed with Corvette's styling, but not with what it had under the hood. Cole liked Zora and his ideas, hired him in May 1953, and for more than 20 years Zora oversaw most of GM's high-performance products. Among his notable early upgrades to the Corvette were a small-block V-8 engine in 1955, as well as a high-lift camshaft and fuel injection in 1957. All of this is told well in a short movie at the start of the exhibits.

Among the models here – in rooms that focus on Corvette's racing heritage, its place in American automotive history, and displays focused on engineering and performance – is the 1974 Stingray that, amazingly, was the only Corvette that Zora ever owned. Other notable models shown here include a 1972 Steel Cities Gray convertible, one of only 479 specialty models in a year when Chevy made 27,000 Corvettes. It's also, a nearby panel tells visitors, one of fewer than 50 Vettes made that year with a 454-horsepower engine and four-speed transmission.

Visitors can also see one-of-a-kind, custom-made Corvettes that have been donated to the museum, such as the Orange Blossom Express, the only 1969 model built in an airplane hangar near the road-racing course at Sebring, Fla., and the 1986 Bill Mitchell Indy concept car, with gull-wing doors, a mid-engine design and a fiery-red paint scheme. More recent models include the 2012 ZR1 driven by GM engineer Jim Mero that set a new one-lap record of 7 minutes, 19.63 seconds for Corvettes on the 12.9-mile, 154-turn Nürburgring in Germany.

Yes, there is much eye candy here. But for the foreseeable future, an added draw will be the sinkhole and the cars it ate.