By National Corvette Museum on February 12, 2018 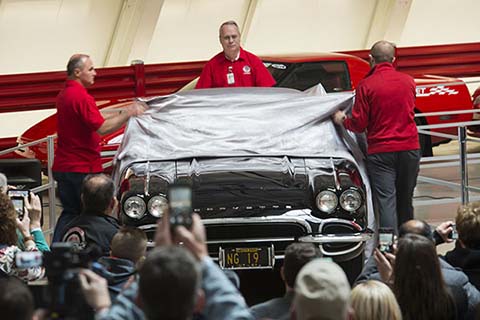 Four years ago, Corvette enthusiasts across the globe held a collective gasp (and in some cases shed tears) when news broke that a 65 foot by 45 foot sinkhole had opened inside the Skydome of the National Corvette Museum, taking eight prized cars with it. Continuing to make lemonade, today the Museum revealed the restored 1962 Tuxedo Black Corvette, placing it back on display exactly how it was prior to the collapse on February 12, 2014.

The '62 had been removed from display in the Skydome one year ago, on the third anniversary of the sinkhole, and the restoration process took place in the Museum's AutoZone Maintenance and Preservation area, where guests could observe the ongoing efforts by Maintenance and Preservation Coordinator Daniel Decker, with the help of NCM staffer Dan Garrett, and Museum Curator Derek Moore.

"We are about the story, we want to tell the story, we want to preserve the story. So, we restored the car to as close as possible to how it was the moment before the sinkhole, the way it was when Mr. Donoho donated the car," said Derek. According to Derek, it was what he would call a minimal restoration. "The frame was straightened a little at the rear, the body pieces or fiberglass components that were damaged or cracked were simply repaired. Only one very small panel on the right side had to have a replacement panel. Everything that we could leave that Mr. Donoho had actually touched, had left on this car, we wanted to essentially leave his fingerprints on the car."

While the car was worked on for almost a year, the total time to perform the restoration took about four months of solid work. "You open the hood and the engine is exactly how he left it. The interior is exactly the interior he had in it, the interior that he so lovingly cared for. We didn't want to take any of that away," said Derek. In fact, a few weeks ago a very old empty sugar packet from Frisch's Big Boy was found under the seat. "We set it aside, finished up the car, and then slipped it right back under the seat where it was."

While David Donoho passed away in 2013 at the age of 76, his friend and attorney of 20 years, Beth Sease, was present to share his story. While David was a simple and unassuming man, according to Beth, Corvettes were one of his two favorite hobbies and he owned three pristine models – the 1962, a maroon 1987 and a 2001. The '62 had been purchased new by David when he was in high school. "He worked at Lily Industrial Paint and had saved up his money for the car," said Beth. "He earned the nickname ‘The Weatherman' because his friends would tease him… if he saw a cloud in the sky he would dart out. He didn't want raindrops on his car." 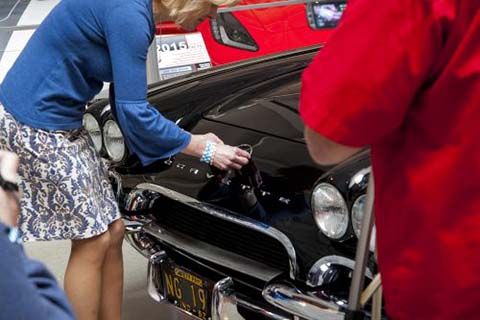 According to Beth, he would only let a few people perform routine maintenance on the car, and with no wife or children, he had the tough decision on what to do with his prized Corvette. "It took him some time to decide where he wanted everything to go but the thing that troubled him the most was what to do with the '62," said Beth. "He didn't think anybody could take care of it so he labored over that decision for about two years." Beth said he considered several options. "At first, he said ‘no one is going to take care of it, I can't think about it being neglected over time. I'm just going to have it destroyed.' So, I said, ‘David, we can't do that.' Later he said, ‘I'm going to be buried in it.' I don't know how serious he was but I said we couldn't do that either."

Beth did a little homework and reached out to Wendell Strode, Executive Director of the National Corvette Museum, to see if the Museum would be interested in the car. "Wendell came up to see David several times. We had conversations in his living room, and Wendell earned his trust."

The Corvette was donated in 2011. "After the sinkhole occurred I just shook my head – oh my word. He wanted it destroyed and he wanted it under the earth. He got both of his wishes." Beth laughs. "Good thing it was only temporary. Thanks to the Museum it was only a brief burial."

Amidst a crowd of over 70 enthusiasts and visitors, the cover on the Corvette was pulled by Derek, Daniel and Dan, with Beth placing the finishing touch on the Corvette – the C1 emblem.

Beth said that David initially felt no one could care for his 1962 the way he had, but that the Museum proved him wrong. "The legacy David left was preserved by you and his legacy lives on. He would have been proud to have been here today to see the way you have come together, diligently restoring his prize."

The 1962 joins the other seven Corvettes that fell victim to the 2014 sinkhole, being placed on display in the Skydome where they were prior to the collapse. General Motors previously restored the 1992 ‘One Millionth Corvette and the 2009 ZR1 ‘Blue Devil.' Five of the Corvettes will continue to be left in the same state they were in from the sinkhole damage. In 2016 the Museum opened ‘Corvette Cave In: The Skydome Sinkhole Experience,' an interactive exhibit chronicling the sinkhole story.