My father had a saying about cars with automatic transmissions. "You might as well let somebody else (expletive deleted) drive!"

He didn't like them. These days he would be in the minority. It's hard to find a car that lets you shift gears yourself and, if you can, it's probably with paddles or by pushing a stick back and forth. Electric cars threatened to kill off the fun of shifting gears altogether because they have no transmissions at all. There's nothing to shift because electric cars work fine with just one gear.

So when a company called Genovation invited me to drive a prototype of their all-electric Corvette with a seven-speed manual transmission – or an optional eight-speed automatic – I thought: "That sounds dumb," and "Absolutely!"

It's not uncommon for me to have those two thoughts in succession. But, in this case, I was really curious. The car, called the Genovation GXE, is powered by two electric motors producing up to 800 horsepower. Genovation will only make 75 of them and prices will start at $750,000. 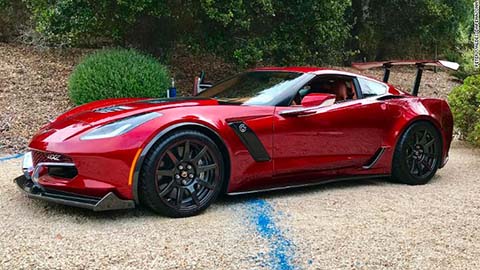 Electric motors are different from gasoline engines in that they produce their maximum torque, or pulling power, at even their lowest operating speeds. Also they don't make obnoxiously loud noises – or the "music of the gods," depending on your taste – when running at high speeds. These things mean an electric car can drive from zero to fast, without ever needing to change gears.

The Genovation GXE wasn't originally an electric car. It left a factory in Bowling Green, Kentucky, as a V8-powered Chevrolet Corvette. Genovation removed the gasoline engine from under the hood and replaced it with electric motors and batteries. General Motors, which makes the Corvette, is not involved in any of these changes to its flagship sports car.

Unlike most cars, the Corvette's transmission isn't anywhere near the engine. Instead, it's all the way in the back of the car, which helps give the Corvette its phenomenal weight balance. (Pedants will note that, technically, this sort of transmission is really called a "transaxle" but I'm not being technical.) The Corvette has a long shaft, called a torque tube, that runs the length of the car carrying the engine's power back to the transmission. It turns out, the torque tube is integral to the Corvette's structure and can't simply be removed without having to make serious changes. And, besides, Genovation just liked the idea of shifting gears, said CEO Andrew Saul.

So Genovation left the torque tube and the transmission – OK, the transaxle – in place and, it turns out, it's awesome. I really do like electric cars. They provide a unique and fun experience with their quiet power and instant torque. But I also love shifting a manual transmission and the intimate connection it gives me to the mechanical workings of a car. So the combination of the two is terrific.

Having a transmission in the car also has a real performance benefit. Being able to shift to higher gears gives the Genovation a phenomenal top speed that can't be approached in single-speed electric cars.

This was not the first time I'd ever driven an electric car with a manual transmission. The last time was about five years ago when I drove a classic Volkswagen Beetle that had been turned electric by a San Diego company called Zelectric Motors.

Shifting gears in that car was like using a foot-operated meat cleaver with abrupt down-and-up movement of the clutch pedal. David Benardo, Zelectric's founder and CEO, tells me he's improved things a lot since then, so shifting gears in his cars – he does classic Porsches and VW buses, too – feels much more normal now.

Genovation has also successfully recreated the fun of gear-shifting in its electric car. It helps that the powerful electric motors in the GXE are limited to operating at a maximum of 7,500 RPM. That's pretty slow for electric motors, but it roughly matches the speed of the V8 they replaced and the motors do start to lose some pulling power above about 7,000, said Saul.

Gear shifting was still pretty much optional in normal traffic. I could have easily put the car in third gear and set off. It would have been fine all day long. But I started out in second gear, sped up a bit and shifted up to third, then fourth.

I could feel the electric motors speeding up. As I approached that hill, I knew the GXE could've handled it fine in fourth gear. But I thought it would feel better in third, so I pushed in the clutch pedal and flicked the shifter up to third gear, then let the clutch out gently. The GXE's motors slowed down and the car went up the hill nice and quiet. I didn't have to shift gears, but it wasn't totally pointless either. The electric motors made enough sound and vibration that I knew when to shift without staring at the gauges.

The best way to describe it was that it felt surprisingly, even weirdly, normal. The prototype car I was driving didn't have the functioning adjustable suspension the production cars will have, a whole new suspension system created by Genovation. The prototype car was permanently in "Track Mode" so the ride was kind of firm. I wasn't able to approach its performance limits – the prototype had its horsepower limited to something under that of a regular Corvette – but, given the car's DNA, the potential is clearly enormous.

Whether a modified Corvette, regardless of its performance potential, would be worth three quarters of a million dollars is a bigger question. But it's great to know that electric cars don't have to mean giving up the fun of downshifting.