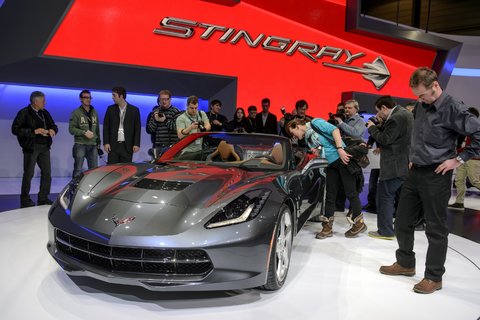 GENEVA - The convertible version of the new seventh-generation Chevrolet Corvette was unveiled Tuesday at the 83rd International Motor Show here.

The automaker said the vehicle, on the fast track to join the coupe in production, would go on sale in late 2013. More details are likely to be disclosed later this month when the convertible has its North American introduction at the New York International Auto Show.

"This is a true dream car," Susan Docherty, president and managing director of Chevrolet and Cadillac Europe, said. She added that while the Corvette name was "synonymous with Americana, the new Corvette is distinctively international in its design, technology and driver experience. That's why it's fitting we introduced the new convertible right here on this stage."

The big question about the new Vette convertible was how would the top actually drop? The answer is an all-new, fully electronic mechanism that can lower (or raise) the top remotely using the car's key fob. The top can be opened or closed at speeds of up to 30 m.p.h., the automaker said.

The convertible will offer basically the same powertrains previously announced for the coupe, along with similar technologies, handling and performance.

It was also announced here that the first Corvette Stingray convertible off the assembly line will be auctioned for charity at Barrett-Jackson's event in Palm Beach, Fla., April 4-6. The first coupe was auctioned in January at a Barrett-Jackson event in Scottsdale, Ariz. It sold for $1.1 million.

The retail price of the convertible was not disclosed.