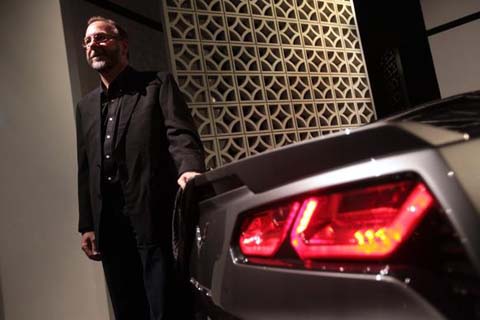 Redesigning an icon like the Corvette presents a delicate balance of preservation and innovation.

New 'Vettes arrive only about once a decade, each paying homage to a storied past while distinguishing itself as a new generation.

The job of designing the seventh Corvette fell to Kirk Bennion. He was in Southern California at the Petersen Automotive Museum last week for the car's first appearance on the West Coast, and he sat down with The Times to discuss the car's radical design departure.

General Motors Co. first unveiled the 2014 Corvette Stingray on the eve of the North American International Auto Show in Detroit in January. As expected, the car drew much fanfare, as well as criticism. The car marked a relaunch of the storied Stingray name first used in 1963 and boasted an estimated 450 horsepower and 450 pound-feet of torque, making it the most powerful standard Corvette in history.

But its styling has created a stir among Corvette purists, who question the decision to replace the car's signature round taillights with squarish LED lights that lean away from center.

As with every Corvette since the first one emerged in showrooms in 1953, the 2014 model will serve as the standard bearer of the brand's engineering, which often finds its way to other models.

Bennion, a native of Sanborn, N.Y., a small town north of Buffalo, had a passion for Chevy early on – his first car was a 1970 Camaro Z-28. At 52, he's been working with General Motors for 29 years. He graduated from the Cleveland School of the Arts with a degree in industrial design.

Here's an edited version of our interview:

So how does one become exterior design manager of Corvette? Did you apply?

No. You're selected. Upper management will basically look at experience and fit and whatnot. I've had some prior experience with Corvette in '86 to '89, just two years out of college, and got to work with the team that created the C-4 and worked on the early C-5.

So within that early stint, you do pick up tribal knowledge of the car, which I think is kind of essential.

Is it a dream job?

Oh, yeah, definitely. It's a privilege and you want to make the most of it every day.

Is there a lot of pressure that comes with redesigning the Corvette?

It's something that you have to be very respectful of, but it's also something that you know this is not just another car to work on. If you're not into working 8- to 16-hour days, you're probably not going to be working on Corvette.

Is there any car that you looked to or saw as an inspiration in designing the C-7?

More often than not, we're competing against the previous Corvette. Ford has their look. Ferrari has their look. Part of what's successful for Corvette is that it has to look like a Corvette, and that it has a very strong, loyal customer base, and we're looking to broaden that. So we're really making sure that we put enough distance in between the C-6 and the C-7. That was our goal.

There's a lot of talk about the rear end. Did you anticipate there would be a lot of discussion about that?

Yes, absolutely. We made a conscious effort to make the back end of the car different. There are a lot of detractors. One of the criticisms is that there isn't a lot of difference from a C-4 to C-5 to a C-6. You know, we kept our dual element lamps, license plate was in the middle, exhaust down below. And from a block away, people couldn't tell you there was a lot of difference – or there wasn't 20 years of difference – in the car.

Round tail lamps especially have been on Corvette for over 50 years. Well, round tail lamps have been adopted by other manufacturers and other cars. So it's no longer a unique night-time signature, and that was something we really wanted to give our customer – a unique LED, indirect-lit signature – something that people, if they saw this car at night, they would know without a doubt that this was a new Corvette.

Why did you go to the square lights?

Well, they're trapezoidal. They're leaned over, but they actually tie into the quarter-panel line. They really fit the flow and gesture of the car in that they're mufti-dimensional.

Why did you decide on the name Stingray?

We've wanted to use it in the past. But we just didn't have the car that we really felt supported it. So the agreement we had with ourselves was that, when we got done with what you know as the C-7, we would step back and make a decision with our upper management about whether this car is new and compelling enough to support the use of the name.

Here again, we're not trying to embody the '63 or '68 or '76 Stingray. This car is all about being a new Stingray.... When it was all said and done, we thought the car was good enough. We put the badge on, but we didn't do that until very late.