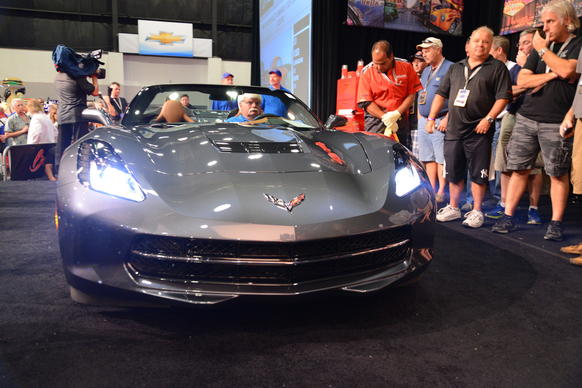 No stranger to auctioning off rare cars for charity, Barrett-Jackson on Friday afternoon sold the world's first 2014 Chevrolet Corvette Stingray convertible for $1 million, including commission.

The car's new owner is no stranger to charity auctions either.

Proceeds from the January sale went to College for Creative Studies, a Detroit school with a renowned automotive design program. Money raised in Friday's Stingray convertible auction will go to the Barbara Ann Karmanos Cancer Institute, also in Detroit.

Hendrick will need to wait several months before taking delivery of either Corvette. Production of the seventh-generation iconic sports car won't start until late summer. When the cars do roll out of the factory, each of Hendrick's models will be the first retail production version of the car Chevrolet sells.

The Stingray convertible, which made its world debut at the recent Geneva Motor Show, is mechanically identical to its coupe counterpart. Both cars are powered by a 6.2-liter direct-injected V-8 engine. It's good for 450 horsepower and 450 pound-feet of torque, and it will push power to the rear wheels via a seven-speed manual transmission or a six-speed automatic.

Although Chevrolet hasn't yet released pricing details on the production Stingray coupe and convertible, it's likely that the coupe will start around $55,000 and the convertible around $60,000.

In addition to Friday's charitable auction of the Corvette, Barrett-Jackson sold a 2011 Dodge Challenger SRT8 392 for $175,000. Proceeds from the sale of that car, which was previously owned by Chrysler Chairman and Chief Executive Sergio Marchionne, will benefit the United Way for Southeastern Michigan.

Barrett-Jackson says that since 1971, it has raised more than $50 million for charities through its auctions.