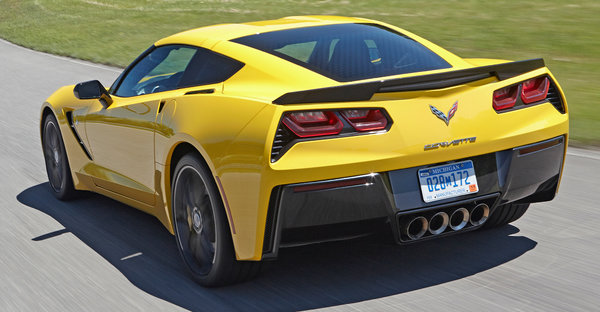 While the Corvette's 61-year history has included some spectacular cars, aspirations for the 2014 model are the highest yet. The Stingray badge evokes the beloved second generation. See more Photos.

Imagine, if you will, that an unnamed manufacturer just released an all-new sports car. It rockets from 0 to 60 miles per hour in 3.8 seconds, pulls more than one lateral g on the skid pad and has a carbon-fiber hood and roof. The interior includes dual high-resolution screens, top-quality materials and the option of racing seats. The manual transmission, with 7 forward speeds, will execute rev-matched downshifts, and it's mounted at the rear of the car for optimal weight distribution.

Other serious performance hardware include a dry-sump oiling system (which keeps the engine lubricated during neck-straining cornering maneuvers), an electronically controlled differential and magnetic ride-control suspension. All of this is concealed beneath bodywork that's thoroughly dripping in exotic, low-slung menace.

If Porsche made such a car, it would cost $125,000. If its fenders wore Ferrari badges, it would cost $200,000. But we're talking about a Chevy with a starting price of $51,995. And this fact blows our minds just a little bit less because the car is a Corvette. Where that particular vehicle is concerned, we've come to expect outrageous returns on our dollar.

The Corvette has a long and often glorious history. But that continuity, stretching back to 1953, means that every new generation of the Corvette tends to be viewed through the prism of its predecessor.

And it's tempting to think of this seventh-generation Corvette Stingray (in 'Vette lingo, the C7) in terms of the sixth-generation Vette – it's like a C6 with better seats, more power, better behavior at the limit. But then you start itemizing the list of aspects that are different, both quantifiable and subjective, and you realize that the C7 isn't much like a C6 at all.

The new car's ambitions are fundamentally loftier, a point underscored by the return of the Stingray name. (Chevrolet is surely hoping to evoke the world-beating 1963 Sting Ray rather than the 1976 model – a fixture of the "Boogie Nights" era – that last wore the badge.)

Start with the handling. "Handling" was never something the old 'Vette was overly concerned with, as long as its lap times were low enough. The car's breakaway behavior was a particular problem, as it would let go suddenly and with great drama – the C6 Corvette is the only car I've ever spun on a racetrack with the stability control system engaged. If Khrushchev and Kennedy had been that twitchy, we might all still be eating canned peas in our fallout shelters while watching "Leave It to Beaver."

The C7, though, is friendly and controllable all the way to the limit. The Z51 performance package includes an electronically controlled differential (called eLSD) that allows fine modulation of the car's rear-end behavior, instantly adjusting from locked and stable to open and nimble, depending on the requirements at hand.

After spending some quality time sliding around the Black Lake testing area at General Motors' proving ground in Milford, Mich., I concluded that buying a 'Vette without the Z51 package would be like getting a puppy without a leash. If you spend a little bit more for a leash, you're going to have a lot better control of that puppy, right?

And the Z51 package is a bargain. For $2,800 you get performance gearing, a transmission and differential cooler, bigger wheels and tires, bigger brakes, a firmer suspension, the dry-sump oil system and the piéce de résistance, that magic differential.

I would also opt for the magnetic ride control system with performance traction management, which goes for $1,795. And the multimode performance exhaust costs a not-insignificant $1,195, but is worth it for the wonderful sounds, if not the five extra horsepower that it uncorks. So equipped, you have a $57,785 car that has everything you need. The Corvette Stingray is not a case where the base price is merely a teaser and the car you really want costs 50 percent more.

Of course, there might be a couple more options I'd find tempting. One car that I drove was fitted with the $4,210 2LT package, which gives you heated and ventilated seats, a Bose sound system and a heads-up display that projects speed and other performance information. (The 3LT interior package, otherwise known as "cover everything in leather," goes for $8,005 and seems gratuitous, given that the basic materials no longer need to be hidden beneath something nicer.) A bit of á la carte interior jazziness was added by the suedelike microfiber seat inserts ($395) and the carbon-fiber trim package ($995).

And as much as I want more carbon fiber in my life, I might skip that option for my own protection. That's because when you open the driver's side door, an angular piece of dashboard is revealed, protruding at just about shin height. And when that corner of dashboard is trimmed in unforgiving carbon-fiber armor, you might inadvertently smash your shin on it hard enough to draw blood. Through jeans.

After that, I approached the 'Vette with the chastened caution of a nine-fingered alligator farmer.

Once you safely slide down into the driver's seat, though, you're in for some fun. First of all, the seat itself is new, with a slim magnesium frame that allows for wider bolsters. And if that seat is not supportive enough, there's an optional track-biased model that will really clamp your guts in place.

Dead ahead is an eight-inch screen flanked by old-fashioned analog gauges. The screen can display a wide array of information, from engine r.p.m. to cornering g-forces to the temperature of the tires.

The optional heads-up display floats in the ether out above the hood. Yet another eight-inch console screen is angled toward the driver and can power down to reveal a hidden storage compartment that includes a USB port, making it a useful place to charge your phone. A Corvette convertible is coming, but all coupes have a removable carbon-fiber roof panel that gives you 75 percent of the top-down experience, although it consumes most of the cargo area when it's stored away.

Fire up the 6.2-liter V8 and the Corvette settles into its familiar V8 lope, with some added bass provided by the optional exhaust system. The base 'Vette packs 455 horsepower and 460 pound-feet of torque; add five to both numbers for cars with the multimode exhaust. The previous Corvette made 436 horsepower, so this one isn't wildly more powerful. But with variable valve timing and direct fuel injection, the C7 feels more flexible, more explosive at any given engine speed. And cylinder deactivation enables an E.P.A. rating of 29 m.p.g. on the highway with the manual transmission. G.M. notes that the 29 figure was achieved without using the car's eco mode. If you engage that, your mileage could actually top 30 m.p.g., quite a nifty number for a car that runs the quarter-mile in 12 seconds.

I doubt anyone will quarrel with the Corvette's performance, but styling might be another matter. As in so many other areas, the C7's looks are a notable departure. I love it, but I'm someone who considers "looks like a Camaro" – a verdict often rendered to the 'Vette's rear end – a high compliment.

What matters more to me is the very fact that the C7 makes such a stylistic departure. Unlike its longtime foil, the Porsche 911, the Corvette is willing to drift with the winds of design. Which means that its styling is of the moment, then dated, then eventually appreciated anew sometime in the distant future. And I acknowledge that the depths of that awkward fashion limbo, when Corvettes smell of Axe body spray and are driven by Eddie Money impersonators, might sour the mood on the new ones a little bit. Hey, that's the price you pay for excitement.

The C7 is not perfect. It has gained 90 pounds, and in a straight line a 2014 'Vette is barely quicker than either its predecessor or a 10-year-old Z06 model. But for once the Corvette isn't solely devoted to horsepower and brute numbers.

Despite offering as much as 638 horsepower, the sixth-generation Corvette never shook free of the phrase, "for the money." It was a great car, for the money.

The Corvette Stingray is just a world-class sports car, no disclaimer necessary.