Sunken Corvette Museum Cars to be Displayed Before Repairs 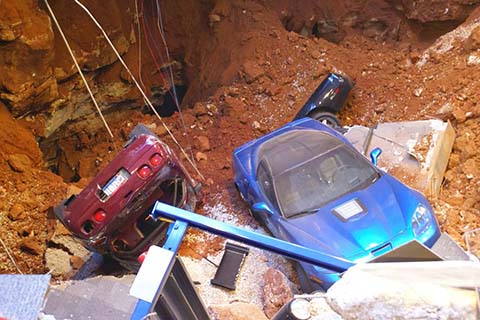 Since a massive sinkhole swallowed up 8 historic Chevrolet Corvettes at the National Corvette Museum, fans around the world have wondered just how badly damaged those rare American sports cars are and due to the popularity of that discussion – the museum will have these Corvettes on display in their damaged state for a short time before the cars are sent off for repairs.

General Motors has already stated that these 8 classic Corvettes will be fully restored at the same body shop that cares for the GM Historical Collection so we know that at one point in the near future, these cars will be as good as new. Even with that in mind, many people (myself included) are wondering just how badly mangled these cars will be when they are removed from the huge hole in the Earth and let the world see how much damage has been done to these Corvettes, the National Corvette Museum is going to have them all on display for a short time before being shipped off for repairs.

Based on a report by the Detroit Free Press, the National Corvette Museum will beginning displaying these damaged cars as they are exhumed from the 50 foot sinkhole in the floor of the museums Skydome. The extraction process is slated to begin sometime in March and the first cars could be up and out of the hole by April. It is at that point that the Corvette Museum plans to open this limited time display showing the sunken cars and each time a new Corvette is pulled from the hole – it will join the sinkhole display. It is expected to take a couple months to get all of the Corvettes out of the huge sinkhole but the museum plans to keep these cars on display until July&at which point they will all be shipped to Michigan for a full restoration with some of the best GM body shop workers in the world.

This is a remarkable idea by the National Corvette Museum. People are wondering how much damage has been done to these 8 rare Corvettes for the same reason that people like to see crashes in NASCAR. Millions of people from around the world have been reading about the museum sinkhole over the past two weeks so offering an organized display showing the cars that were swallowed up by the natural disaster will almost surely bring people to the museum for a chance to see the crushed Corvettes before they are fixed. The Museum is likely to be facing massive expenses stemming from the sinkhole and the process to repair it so capitalizing on the interest in the damaged Corvettes will likely help generate some extra cash flow while also offering Corvette fans a rare chance to see these damaged historic cars before they are returned to their like-new status.